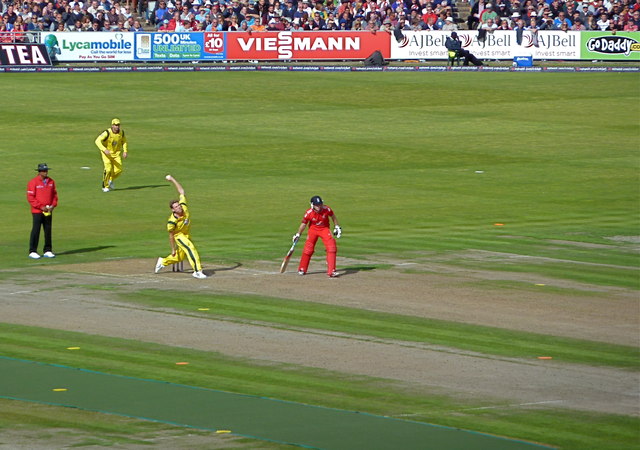 Australia beat England at the Ageas Bowl too narrowly win the final T20 by five wickets. Their first win of a three match series that finished 2-1 to England.

Set 145 to win, Australia comfortably chased down England’s first innings total. Mitchell Marsh hitting the winning runs with a scampered single with four balls to spare. The result leaves Australia at the top of the T20I rankings, with England just four points behind in second.

In his 15th T20, Mitchell Marsh hit an unbeaten 39, including 14 off one Mark Wood over, as he guided Australia to victory. The Aussie all-rounder, who averages 19.90 in T20 internationals, played a man of the match knock, rescuing Australia who once again collapsed in the middle orders.

Earlier, white-ball captain Aaron Finch (39) and Matthew Wade (14), who replaced David Warner at the top of the order for his 30th T20I, got Australia off to a flying start. Off the first three overs, the two combined to hit 30 runs. Wade’s short but explosive cameo included a towering six of Jofra Archer.

Too right, @nassercricket – what a supreme stroke from Wade as he deposits Archer into the stands for six 💥#ENGvAUS 🏴󠁧󠁢󠁥󠁮󠁧󠁿🇦🇺

But, Australia once gain lost wickets in the middle orders as Marcus Stoinis (26) and Glenn Maxwell (6) were out cheaply. First, Adil Rashid bowled Aaron Finch with a beautiful flighted googly, Australia had collapsed from 70-1 to 87-4. Next, Smith (3) fell caught and bowled to Rashid, who finished with figures of 3-21. Suddenly, Australia, previously coasting to victory, found themselves 100-5 and in danger of faltering in a seemingly processional chase.

However, with a run a ball required, a 40 run partnership between Marsh and Ashton Agar secured Australia beat England and recorded their first win of the series.

Earlier, on an unchanged pitch from the first two T20’s, England struggled on a surface that looked a touch two-paced. In Jos Buttler and Eoin Morgan’s absence, Tom Banton (2) and Sam Billings (4) failed to stake their claim for a regular spot in a usually formidable T20 side.

Yet, Jonny Bairstow once again showed his class at the top of the order. Top-scoring with a resilient 55; his innings was as watchful against the seamers as it was imposing against the spinners. After a frustrating start, the Yorkshire opener eventually found the middle of the bat, hitting three fours and three sixes on his way to a fifth T20I fifty for England, before eventually falling caught and bowled to Ashton Agar.

Previously, Dawid Malan found himself on an impressive run of T20 form averaging 50.23 at a strike-rate of 147.00 – with one hundred and seven half centuries in just fifteen matches. However, in the third T20, the Yorkshire power-hitter was out cheaply for 21 after a promising start. Arguably, it was only thanks to brief cameos from stand-in skipper Moeen Ali (23) and Joe Denly (29) that England muscled their way to a below par score of 145-6. Undoubtedly, a total that was 10-15 runs short of being competitive.

Whilst, England failed to grapple with a difficult surface, Australia’s bowlers impressed. Notably, Josh Hazlewood, playing his first T20I in four years, finished with figures of 1-23. Adam Zampa took two wickets with some decent leg-spin. Elsewhere, Mitchell Starc, clearly benefiting from getting overs under his belt in the first two T20’s looked sharp. The left-arm paceman taking 1-20 of his four overs.

All set for the ODI’s.

Even with Australia’s first win of the tour, the T20 series finished 2-1 to the hosts. Next, both sides contest a three match ODI series that begins on Friday 11 September at Old Trafford (13.00pm – GMT). Clearly, with Australia finding some form after a six month absence from playing cricket, it should be a fascinating series to conclude the English cricketing summer.

We hope you enjoyed this article ‘Australia beat England to avoid T20 series white-wash’. Who do you think will be the next T20 world champions? Let us know!