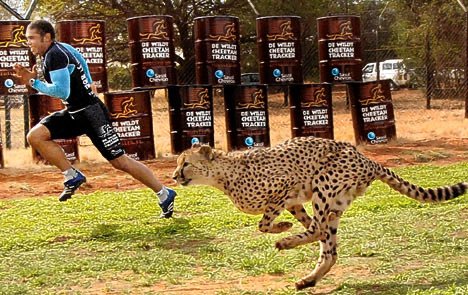 Who are the fastest rugby players ever to grace the pitch?

Speed is an ever vital factor in today’s game, some of the quickest players to grace the pitch were often also regarded as the some of the best respectively.

We take a look at the fastest rugby players from the past and present and have compiled it into a list to determine who comes out on top as rugby’s ultimate speedster.

The following times are the best recorded times over 100m for each respective player:

The American had initially set his sights on playing American football, Baker played NCAA Division 2 college football and was later signed by the Philadelphia Eagles in July 2011. Baker unfortunately suffered a knee injury which cut his NFL career short.

The winger began playing rugby full in 2013 and was playing for the USA Sevens National Team by 2014.

The American has scored more than 200 tries in the Sevens World Series, ranking second among Americans and seventh overall globally for the most career tries.

Due to his sheer speed it is no wonder that Perry Baker has established himself as one of the best rugby sevens players in the world. Baker was awarded the World Rugby Sevens Player of the Year award in 2017 and 2018.

Ngwenya was born in Harare, Zimbabwe however moved to Dallas, Texas in 2003 as a teenager after graduating from high school.

The young winger flourished stateside and played for the under 19 USA national team before being scouted by Biarritz in 2007. Ngwenya went on to make 239 appearances for the Pro 14 side scoring 430 points.

One of the rugby greats and definitely the most infamous player on the list. South African winger Bryan Habana was known for his blistering pace and acceleration on the field.

Habana had an illustrious career which spanned over the course of two decades. The Springbok winger most notably won the 2007 Rugby World Cup whilst also being named the 2007 IRB Player of the Year consequently. During the 2007 World Cup Habana scored eight tries, equalling the single-tournament record set by Jonah Lomu in 1999.

The winger currently remains as the second all time test try scorer with 67 tries, behind only Daisuke Ohata.

The Springbok also won the European Champions Cup in 2014 (Heineken Cup) and 2015 (Champions Cup) whilst playing for Toulon.

Chavanga was born in Masvingo, Zimbabwe, his speed was apparent from a young age and was subsequently offered a scholarship to Prince Edward School in Zimbabwe. Chavanga became the youngest player in the school’s history to play for the  first team.

The winger went onto play for many clubs including the Stormers and Newport Gwent Dragons as well as representing the South African National Team with four caps.

The American was touted as rugby’s fastest player until very recently. Isles flourished on the track from a young age and still holds the records in long jump, 100 meter, 200 meter and 400 meter at his high school (Jackson High School, Massillon, Ohio.)

Before turning his interest to rugby in 2012 the American ranked as the 36th fastest sprinter within the United States with a 100 meter outdoor personal best of 10.13 seconds.

Since joining the USA National Sevens Rugby team the winger has gone on to become the highest ever try scorer for the United States. Isles became the first American to surpass 200 tries in February 2020 during the 2019-20 World Rugby Sevens Series in Los Angeles.

Professional track and field sprinter Trae Williams recently swapped his running shoes for rugby boots after signing a contract with the Australian Sevens National Team in 2019 on a two year contract.

Williams grew up in Brisbane and played rugby union and rugby league. The Australian youngster considered playing for the Brisbane Broncos in the National Rugby League before focusing on a career in athletics.

“Quadzilla” as he is known, is currently the fourth-fastest Australian of all time over 100 metres, clocking in at 10.1 seconds during the 2018 Australian Athletic Championships.

This time puts Williams ahead of USA speedster Carlin Isles ever so slightly.

With the success that fellow sprinters have had in the sport Williams must feel encouraging signs, who at just 22 years old has a highly promising career ahead of him.

The Most Expensive Championship Players

What is the Fastest Tennis Serve of All Time?