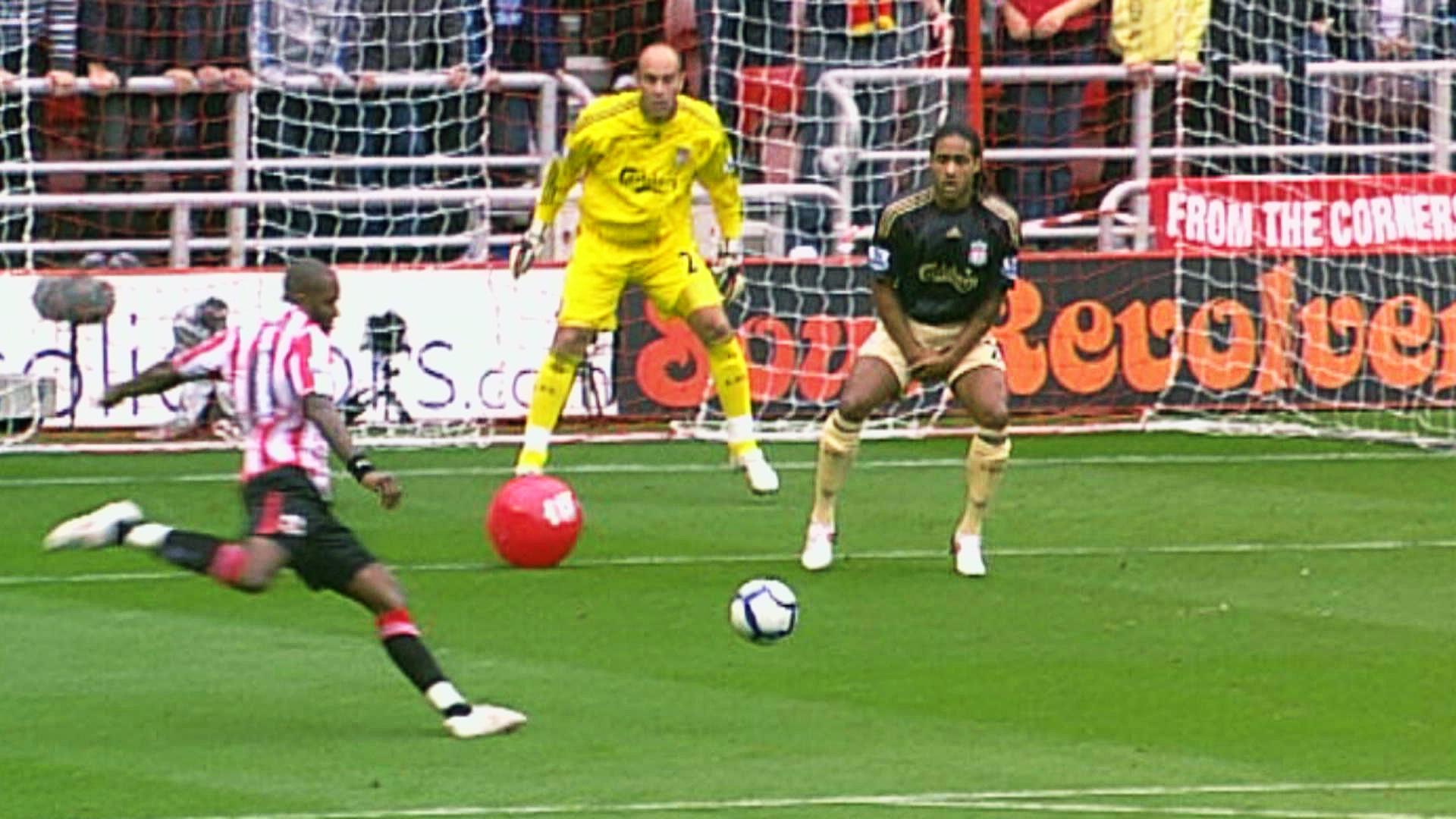 The strangest goals ever scored!

From the infamous ghost goal to the perplexing beach ball incident, we’ve almost seen it all in football. Over the years we have been graced by some utterly baffling goals.

The greatest game on earth has treated us to some absolutely corkers, many of which would no longer stand a chance of being allowed with the likes of today’s laws and advanced technology.

The Sporting Ferret Team select the strangest goals ever scored and run through their top five picks.

Kießlings infamous ‘ghost goal’ came in 2013 during a match-up between Hoffenheim and Bayer Leverkusen. The goal has become one of the strangest goals to be scored (or not scored) in football.

A Leverkusen corner in the 69th minute led to Kießling making contact with the cross via a header, the ball heading towards the near corner and into the side netting. The striker acknowledges the near miss, putting his head into his hands.

Seconds later Kießling see’s the ball inside of the goal and his teammates celebrating. Kießling celebrates with his fellow teammates, fully knowing the goal didn’t go in. Following some deliberation with the referee, the goal was still allowed and play resumed. Leverkusen went onto win 2-0 and despite heavy criticism after the match, the result stood.

The aftermath of the goal led to a strong push for goal line technology, which inevitably emerged triumphant.

4. The Wind Becomes The Second Man

A preliminary round FA Cup tie between Guernsey and Thamesmead Town resulted in one of the strangest goals ever to be scored, thanks to a strong gust of wind.

Thamesmead Town skipper Scott Kinch lets loose a shot from distance which seems to be heading towards the corner flag. Fans even jeer at Kinchs’ poor attempt thinking the ball is heading for the car park.

However as the ball heads for the corner flag, a strong gust of wind intervenes and redirects the ball into the other direction landing smack onto the crossbar.

Thamesmead Town striker Jack Mahoney pounces onto the rebounded ball and grabs the goal. The away side come away with the 2-0 win and progress to the next round.

Reminiscent of the famous Cissé curve goal against Chelsea, Polish player Adam Czerkas produces a top corner screamer albeit via an unintended deflection.

During the 64th minute, a Wisla Plock defender attempts to clear his lines on the edge of the box with Czerkas on his tail. The clearance deflects onto Czerkas and curls perfectly into the top right corner, leaving the keeper in no-man’s land.

Czerkas’ goal wins the match for Odra 1-0, and with no doubt remains the strangest goal ever scored by the centre-forward.

We head to the Italian lower leagues to see Domenico Zampaglione’s two footed screamer. During a 2nd Division Group B tie between Tuttocuoio 1957 and Vigor Lamezia we witness a good old two footed tackle, a true fan favourite, send the ball flying into the opposition net.

A Tuttocuoio player lays off the ball for his teammate which is in turn slowed down by the windy conditions. Here we see our protagonist Zampaglione fling himself at the ball, in a full throttled two footed tackle.

The tackle see’s Zampaglione win the ball and subsequently sends it flying through the air with the grace of the wind, straight into the opposition net. Lamezia win the match 1-0 thanks to Zampaglione’s strange yet spectacular goal.

Probably the most famous goal that was ever scored in peculiar circumstances. What better place for it to happen on football’s biggest stage.

During a Premier League match between Sunderland and Liverpool we see Darren Bent convert a half volley attempt, with the unlikely aid of a beach ball.

The strike looked to be covered by Liverpool keeper Pepe Reina, however a fan flung beach ball clearly had different ideas. Bent’s strike ricochets off of the beachball, causing Reina much confusion, sending the ball into the net and Reina utterly perplexed.

An ironic conclusion all in all when we consider it was a Liverpool fan who had thrown the beach ball onto the pitch. Sunderland won the game 1-0 leaving Liverpool feeling deflated from such strange events.

Now you can say you’ve seen it all!

We hope you enjoyed the article ‘The Strangest Goals Ever Scored.’ What is the strangest goal you’ve ever seen? Let us know!

The Bundesliga Is Back: Super 6 Saturday Preview