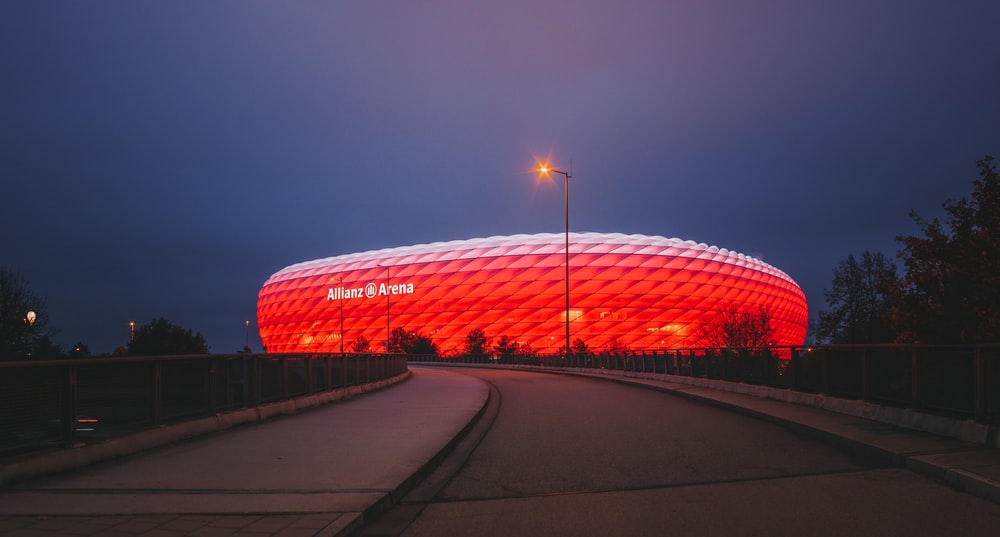 The top 10 stadiums in world football

As fans begin to return back to their stadiums, following the coronavirus pandemic, we take a look at the best from around the globe. Football clubs invest millions into their grounds, resulting in magnificent venues fit to help the best teams perform to their maximum capabilities.

A variety of different factors make a football stadium great. The size and attendance, the shapes, the atmosphere and the aesthetic appeal that leave football fans all over the world in awe at its beauty. The ability to attract people from across the globe, is the main contributing factor to a great stadium.

Many benefits comes with owning one of the best stadiums in the world. It unites fans and tourists, which help increase the revenue of the club. From the Wanda Metropolitano in Spain to the Allianz Arena in Germany, we explore the top 10 stadiums in world football.

The first stadium on the list is home to Italian giants Juventus. More commonly known as the ‘Juventus stadium’, it opened in 2011 and hosts an incredible atmosphere in Turin. It’s modern design has attracted fans from all over the world, and has a part to play in the teams recent domestic success.

The 36 time champions have now won nine straight titles in a row. They play in front over 41,000 fans each game and usually sell out their stadium. Similar to the Santiago Bernabeu, it holds a tight-knitted enclosure to intimidate the opposition but motivate their own team, and therefore just pips the Bernabeu to the list. This multi-purpose stadium is located in Mexico City and is home to Club America and the Mexico national team. Sitting over 2000m above sea level, this stadium is the largest in its country. After opening in 1966 it has hosted two world cup finals, 1970 and 1986. Unfortunately, it doesn’t hold good memories for England fans who witnessed Diego Maradona’s ‘Hand of God’ here.

It’s official capacity holds 87,523 people after a reduction in seating brought it down from up to 105,000. It’s spherical shape enables an electrifying atmosphere and is one of the most famous stadiums in world football.

More famously known as La Bombonera (The chocolate box) due to its square design, is arguably the most exhilarating on this list. Located in Buenos Aires, Argentina, it holds 54,000 people. In comparison to the rest of this list it has a relatively small capacity. The stadium, active since 1940, holds three deep stands and one vertical, giving it a unique shape.

It is home to the Boca Juniors, who most definitely make use of its tight surroundings. It could be considered as one of the less aesthetically pleasing stadiums on the list. However, it is certainly made up for by Boca fans who bring the venue alive during a match. The Maracana is Brazil’s national stadium and is often selected for Brazilian clubs Flamengo and Fluminense to play in. It is situated in the wonderful city of Rio, in sight of the Christ the Redeemer statue. The Maracana stands as a symbol for how worshipped football is in Brazil. It’s capacity now holds 78,838 and was built in 1950 just in time to host the world cup final that year.

It is most notable for hosting this final between Brazil and Uruguay, even though the host nation lost. The match held an attendance of around 200,000 people, the most ‘official’ attendance in football history, but has had to reduce its capacity over the years. 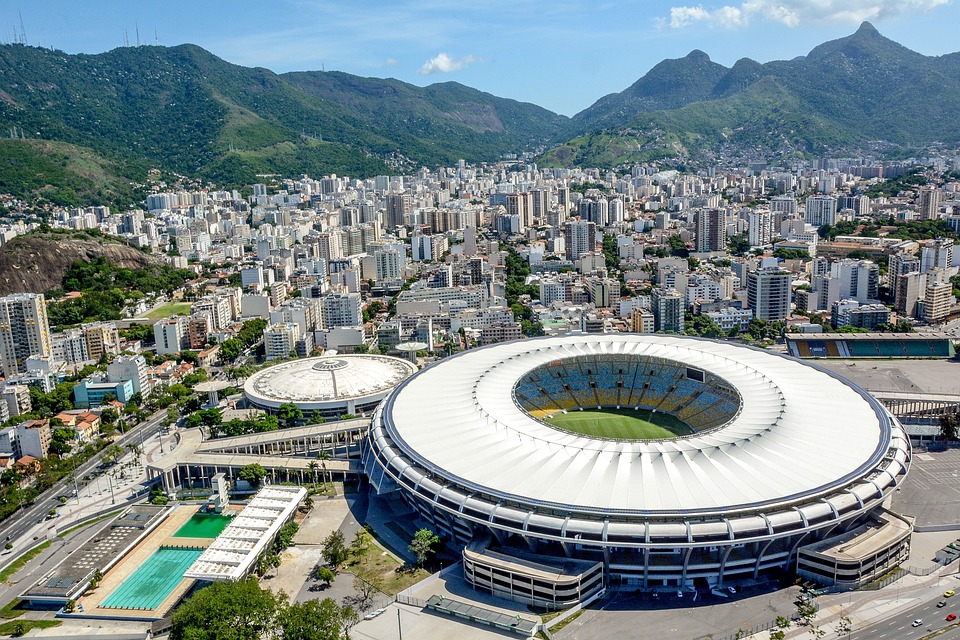 It was difficult to leave out the Santiago Bernabeu, home to Real Madrid, from this list. However the city of Madrid holds two great stadiums. Atletico Madrid have played their games in the Wanda Metropolitano ever since 2017 when it first opened. It’s capacity is 68,456 and is one of the most aesthetically appealing stadiums on this list.

Although fairly new, it is designed for the fans to create fortress during home games. It’s dome-like shape allows fans to get a good view from wherever they are seated. It is a great tourist attraction for their club, allows for an electric atmosphere and certainly rivals their Madrid counter-parts.

After opening in 1989, the FNB stadium went under renovation years later in preparation to host the 2010 world cup final. Although the sound of the vuvuzela may come haunting back, it provides memories of an historic world cup in Johannesburg. It can host 94,736 people, and held 84,000 in the 2010 final.

It is home to the Kaizer Chief football team, one of the biggest clubs in Africa. The South African national team also play their games there. Known as the ‘soccer city’ stadium, it ironically also hosts rugby union games throughout the year.

• The largest stadium in Africa with a capacity of 94,736

As we move into the more historic stadiums, the Camp Nou situates at number four on the list. After opening in 1957, it has seen some of the best footballers in the world grace its pitch- including Diego Maradona and Lionel Messi. It is home to FC Barcelona, who are arguably up there as the biggest club in Europe.

It is Europe’s largest stadium with a 99,354 capacity and is the fourth biggest in the world. From the outside it doesn’t seem like much, but as you walk in it is mesmerising. It has witnessed some of the greatest football over the years and is a truly iconic ground.

Camp Nou from above🔥 #FCBarcelona

As one of the most famous stadiums in the world, both AC Milan and Inter Milan share the San Siro. It is the biggest ground in Italy and their most notable one. Like Camp Nou, it has seen some of the greatest footballers in the world play, which is why the venue is so well respected. With a capacity of 80,018, the San Siro has opposing fans leaving stunned by its magnitude.

Although from an outside perspective, its appearance isn’t that amazing. Nevertheless the 94 year old stadium is a fortress for the Italian heavyweights. It is definitely one of the best grounds in the world and makes number three on our top 10 stadiums list.

The quiet before the storm 💪

The Allianz Arena in Munich has to be the best looking stadium on this list. It was designed to please the eye’s of spectators in 2005 and has hosted many famous fixtures in the past. As one of the greatest modern stadiums to date, the 70,000 seater is home to German giants Bayern Munich.

The array of colours on the outside is primarily red for Bayern and is stunning to view. However it was able to turn blue for 1860 Munich, the other football club in the city. They moved from the ground when they were relegated to the third division in 2017. 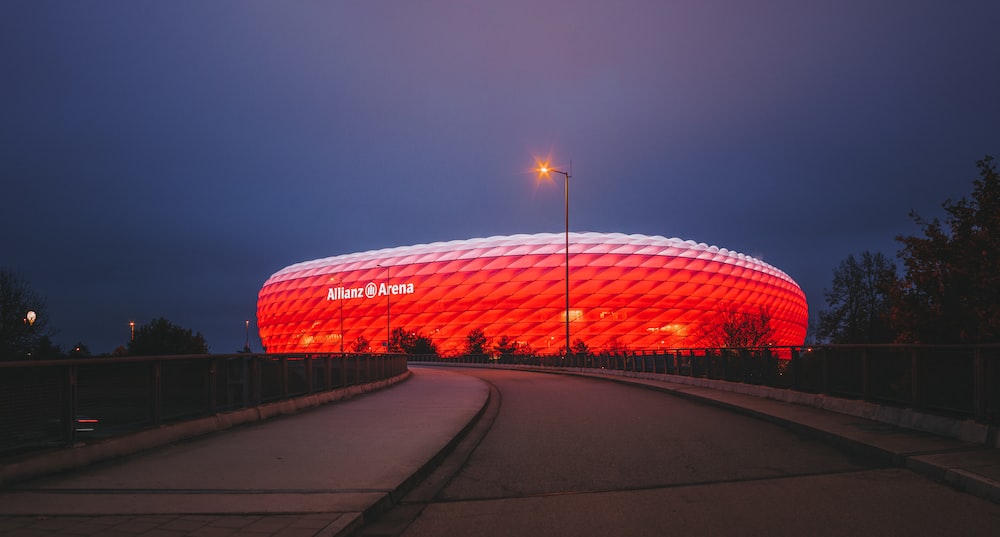 Number one on the list, and deservedly so, is London’s Wembley stadium. The most famous stadium in the world was renovated in 2007 on the same site to the previous Wembley, which had been there since 1923. It has a timeless design and incorporates every detail needed to make it ‘the home of football’.

The 90,000 seater is the fortress to the England national team and will host the European championship final next summer. It’s 133m arch significantly represents the nation. The iconic venue is no doubt the greatest stadium in world football and has the potential to be for years to come.

(4500)
£14.99
Medalist design - aids shoulder movement and flexibility, making this suit ideal for training Fully lined 100% Chlorine resistance - for long lasting performance Quick dry - dries faster after your swim workout
(as of 18th September 2021 - More infoProduct prices and availability are accurate as of the date/time indicated and are subject to change. Any price and availability information displayed on [relevant Amazon Site(s), as applicable] at the time of purchase will apply to the purchase of this product.)

(15511)
£8.99
COMPACT & LIGHTWEIGHT – The ultra lightweight absorbent microfiber towel saves so much space and can easily be stored in any backpack, sport or gym bag. Whether you need a lightweight microfibre beach towel, camping towel or swimming towel, we have t... read more
(as of 18th September 2021 - More infoProduct prices and availability are accurate as of the date/time indicated and are subject to change. Any price and availability information displayed on [relevant Amazon Site(s), as applicable] at the time of purchase will apply to the purchase of this product.)

(19126)
£3.99
Science in Sport delivering superior sports nutrition, so you can train harder, race faster and recover quicker. 800ml Drinks Bottle For use with SIS Products or any other brand! Great quality & highly durable Made in the EU
(as of 18th September 2021 - More infoProduct prices and availability are accurate as of the date/time indicated and are subject to change. Any price and availability information displayed on [relevant Amazon Site(s), as applicable] at the time of purchase will apply to the purchase of this product.)

(438)
£19.35
Supersoft has been one of the most popular golf balls for years, and we’ve combined incredible cover, core and flight technologies to make it even better. The new Hybrid Cover features an innovative PARALOID Impact Modifier made by DOW Chemical. This... read more
(as of 18th September 2021 - More infoProduct prices and availability are accurate as of the date/time indicated and are subject to change. Any price and availability information displayed on [relevant Amazon Site(s), as applicable] at the time of purchase will apply to the purchase of this product.)

(124)
£1.50
-
(as of 18th September 2021 - More infoProduct prices and availability are accurate as of the date/time indicated and are subject to change. Any price and availability information displayed on [relevant Amazon Site(s), as applicable] at the time of purchase will apply to the purchase of this product.)

(15471)
£8.95
➤ THE BETTER BOTTLE - What is quality? For us at Super Sparrow, excellence comes from the details, BPA Free Tritan Copolyester and premium craftsmanship. That's what makes up our superior Sports Water Bottle. Our quality paired with unbeatable custom... read more
(as of 18th September 2021 - More infoProduct prices and availability are accurate as of the date/time indicated and are subject to change. Any price and availability information displayed on [relevant Amazon Site(s), as applicable] at the time of purchase will apply to the purchase of this product.)

(66)
£4.99
Official Premier League 2021/22 Adrenalyn XL Trading Cards Collect All x464 Trading Cards! All 20 Premier League Clubs To Collect! QR Code In Each Packet Unlocks A Digital Packet! Collect All x4 Colours Of Classic Tins Contains: x8 Trading Card Packe... read more
(as of 18th September 2021 - More infoProduct prices and availability are accurate as of the date/time indicated and are subject to change. Any price and availability information displayed on [relevant Amazon Site(s), as applicable] at the time of purchase will apply to the purchase of this product.)

(6054)
£10.88
USB Rechargeable. Charging via the provided USB cable. 1200mAh polymer battery is included, no need to buy batteries any more. Lightweight & Adjustable. Weighing only 68g and with its easily adjustable, elastic headband, the headlamp is perfect for o... read more
(as of 18th September 2021 - More infoProduct prices and availability are accurate as of the date/time indicated and are subject to change. Any price and availability information displayed on [relevant Amazon Site(s), as applicable] at the time of purchase will apply to the purchase of this product.)
Related Topics:Allianz arenaCamp NouFootballFootball stadiumssan siroWanda MetropolitanoWembleyworld football
Up Next