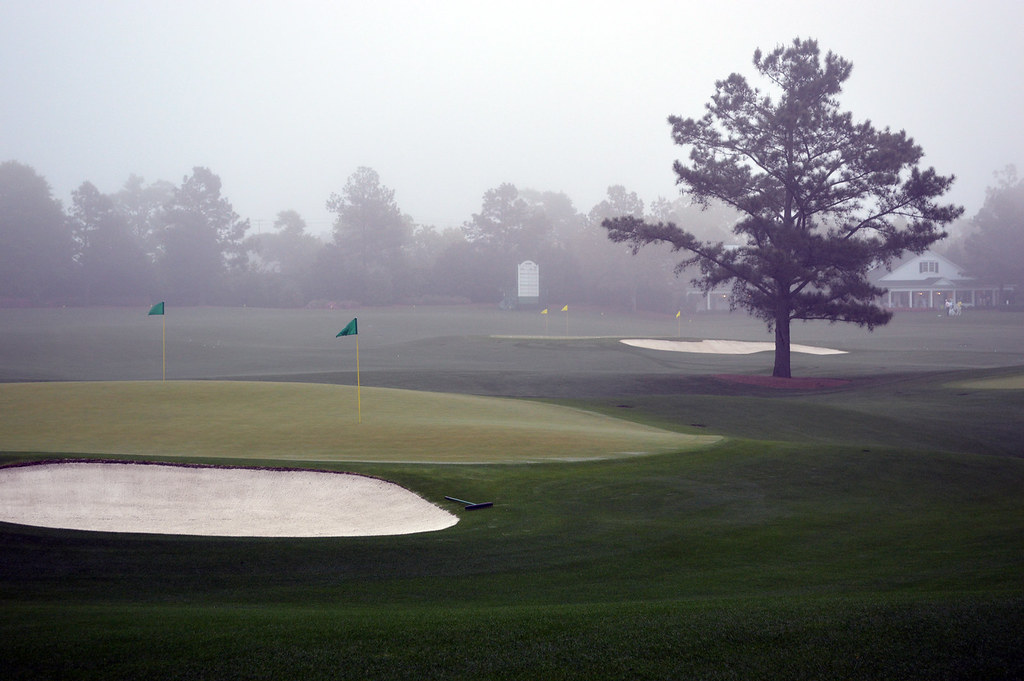 The Masters is one of the most recognised events in the sporting world and never fails to serve up drama and magic.

With a whole host of players vying for the title this weekend, we take a look at the greatest moments at the famous Augusta National.

In the final round of the second annual Augusta National Spring Invitational, Gene Sarazen hit the ‘Shot Heard Round the World.”

Sarazen holed a four wood at the par-five 15th hole for an albatross. He went on to win a 36-hole playoff over Craig Wood. The tournament came to be known as The Masters.

Both men grew up in the same caddie yard in Fort Worth, Texas and faced off in an 18-hole playoff for the Masters.

Nelson got off to a poor start and trailed Hogan by three shots after five holes. Hogan played well and finished the last 13 holes in 1 under. This wasn’t enough though as Byron played the same 13 holes in 5 under to win.

The two squared off in an 18-hole playoff, with both men so focused there wasn’t much chatter between them as Snead claimed victory by a single shot.

The legend, Arnold Palmer, was born with a thrilling charge on the back nine. Palmer became the first player in Masters history to birdie the final two holes en route to victory.

Roberto DeVicenzo birdied the 17th hole in the final round to tie with Bob Goalby. However, the Argentine’s playing competitor Tommy Aaron mistakenly wrote a par 4 on the scorecard. When DeVincenzo signed for the higher score, he missed out on a playoff by one shot.

The 1975 Masters saw Lee Elder become the first African-American to compete at the tournament. He would, however, miss the cut by four strokes.

The tournament was also made memorable by Jack Nicklaus’s record breaking fifth Green Jacket. In one of Augusta’s most exciting final rounds, Nicklaus holed a 40-foot putt for birdie at the 16th hole.

His nearest rivals, Tom Weiskopf and Johnny Miller, both missed makeable birdie putts on the final hole that would have forced a playoff and, when the dust settled, Nicklaus was announced the winner.

South African Gary Player started the final round eight shots off the pace. With seven birdies over the final 10 holes, Player roared into the clubhouse lead. And when Hubert Green missed a short putt on the final hole, Player earned his third Masters. His 64 remains the lowest final round by any tournament winner.

Holding a three-shot lead with three holes to go in 1979, Ed Sneed finished bogey-bogey-bogey to force the first sudden-death playoff in Masters history.

In the mix was former Masters champion (Tom Watson) and Masters rookie (Fuzzy Zoeller). Zoeller drained a long birdie putt on the second extra hole to win in dramatic fashion.

In perhaps the most remarkable golf tournament ever played, a series of eventual World Golf Hall of Fame members were outdone by a stunning charge from the Golden Bear.

In the final round, 46-year-old Jack Nicklaus birdied the ninth hole and then hit one heroic shot after another for a final-nine 30. He walked off the 18th green to a standing ovation and, when a late charge from Greg Norman collapsed, Nicklaus won his sixth Masters and became the oldest player to don the Green Jacket.

In one of the most dramatic playoffs in history, Georgia native Larry Mize chipped in on the 11th for birdie to deny Australian Greg Norman the Green Jacket.

Needing birdie to win on the last hole, Sandy Lyle found himself in a fairway bunker.

Pulling out a seven iron, he struck one of the crispest shots in Masters history, before holing his downhill putt for the needed birdie.

Only Jack Nicklaus had defended the Masters before Nick Faldo forced his way into a playoff, thanks to a final round 69.

In the playoff, his opponent Raymond Floyd would hook his approach shot into the water on the 11th to hand the Englishman the title for the second year in a row.

Former champion, Ben Crenshaw, was a pallbearer at the funeral for his long-time instructor Harvey Penick early on in the week of the 1995 Masters.

Rather than withdraw, Crenshaw played inspired golf to honour his coach, claiming his second green jacket in the process.

Greg Norman held a record six-shot lead going into the final round. But, playing with the Great White Shark on Sunday was his golfing nemesis, Nick Faldo. Norman would stumble home with a 78 whilst Faldo produced a stunning 67 to claim his third Masters.

Having just turned professional in 1996, Tiger didn’t have the best of records at Augusta. That week however, he demolished the field by a full 12 strokes in one of the greatest Masters moments ever seen.

A year before the tournament, Spaniard José María Olazábal couldn’t walk due to a long-term foot injury. But, a gutsy final round 71 was enough for the Spaniard to claim his second Green Jacket and secure one of greatest ever comebacks in golf.

After 15 Top 10 finishes, Phil Mickelson finally got across the line in 2004, despite Ernie Els firing two final-round eagles at him to set the clubhouse target. With a play-off looming, Phil coaxed a 20-footer in on 18 for his first Major.

All of Tiger Woods’ ability and imagination were tested when his tee shot at the par-3 16th missed the green in the final round. His deft touch pulled off a precise chip shot that hung on the lip for a second before toppling into the hole for a miracle birdie. The victory was Tiger’s fourth Green Jacket.

After victories in 2004 and 2006, Mickelson was looking for his hat trick. And on the back nine the American produced some miraculous recovery shots, including arguably the best shot of his career, a six iron out of the pine straw and under the tree to less than 10-feet.

South African, Charl Schwartzel, produced four birdies in a row to finish his final round. The birdie run was enough to give him a two shot victory over the Australian pair of Adam Scott and Jason Day.

This Masters delivered two of the greatest shots ever witnessed at Augusta National. Louis Oosthuizen made an albatross at the par 5 second. The amazing shot helped the South African get into a playoff with Bubba Watson.

On the second extra hole, Watson was deep in the trees to the right of the 10th fairway. It was time for Bubba Golf. The left-hander hit a severe hook out of, and around, the trees onto the green for an easy two-putt par and the win.

Just nine months earlier, Adam Scott had handed The Open to Ernie Els after a disappointing finish. Scott was out for redemption and, on the second hole play-off, he would hole his putt to win his first Major.

In 2015, American Jordan Spieth was also looking for redemption as he missed out on victory in the previous year despite leading going into the final round.

Spieth dominated the field, equaling Woods’ winning score of 18 under in 1997. He also became the second-youngest Masters champion and the first player in 39 years to lead a Masters from start to finish, shooting a record 28 birdies in the process.

Reigning Champion, Jordan Spieth, took a commanding lead in to the back nine, after four birdies on the front, but nobody could predict what was going to happen from that point.

Spieth started the back nine bogey-bogey before stepping onto the 12th tee and finding Rae’s creek not once, but twice! He carded a seven and Englishman Danny Willett overtook him with birdies on three of his final six holes to become the first Englishman in over 20 years to win a Green Jacket.

At the 74th time of asking, Spain’s Sergio Garcia finally claimed his first Major after several near misses. After bogeying the 10th and 11th and then hooking his drive into the trees at 13, it looked like yet another unhappy ending for the Spaniard. But a scrambling par, a birdie at 14, then an eagle at 15 got him back in touch with Justin Rose.

A playoff ensued, and Garcia produced a stunning birdie at the 18th to win his biggest title to date.

In what is arguably the biggest comeback in sporting history, Tiger Woods produced some sensational golf, and, thanks to Francesco Molinari’s disappointing finish, Woods was able to bogey the last hole for a one-shot victory over Dustin Johnson, Brooks Koepka and Xander Schauffele.

We hope you enjoyed this article ‘The Masters: Greatest Moments at the Augusta National’. What is your most memorable Masters? Let us know!

The Augusta National: Georgia On My Mind