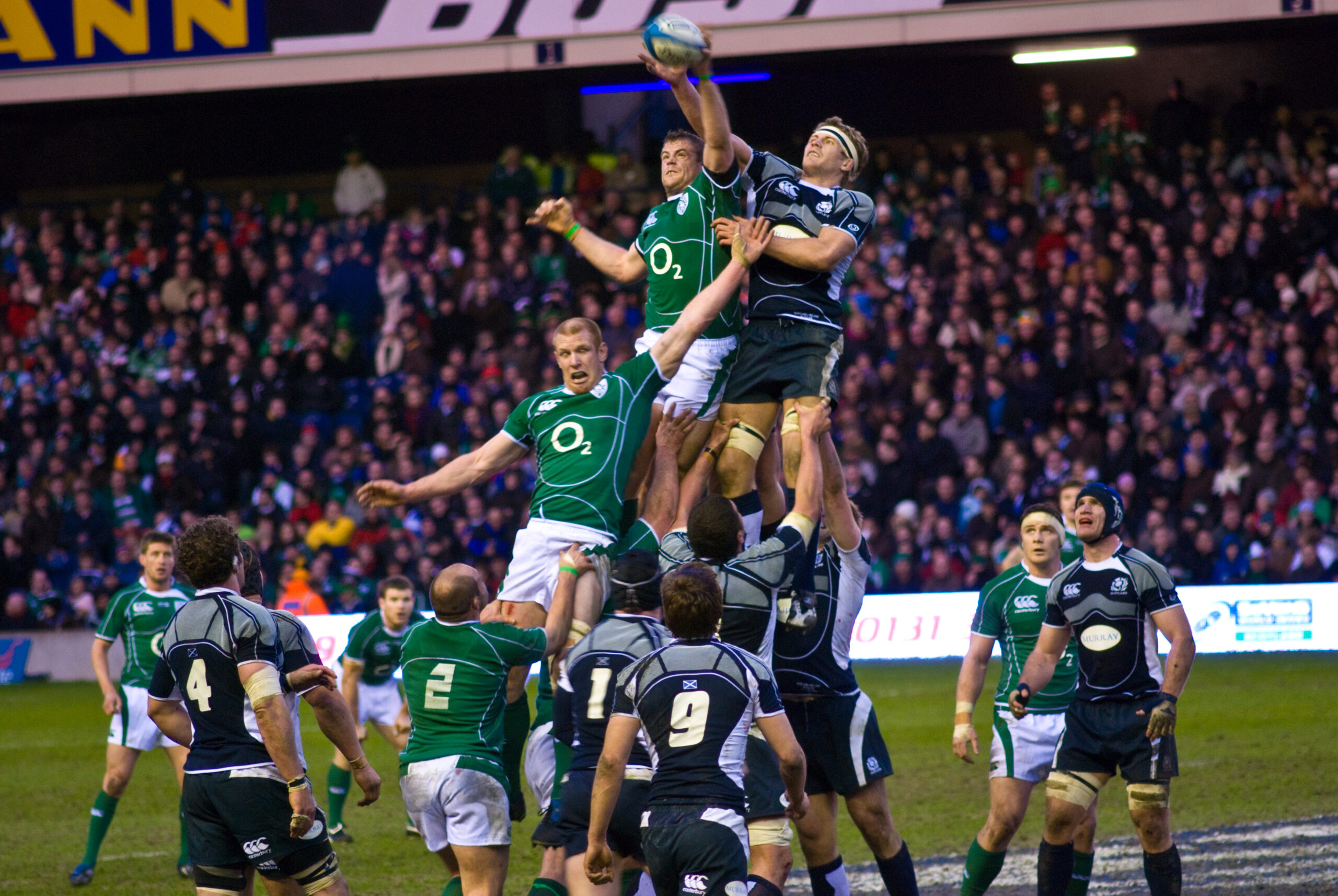 Despite the absence of fans during the 2021 Six Nations Championship, we have been gifted with another mesmerising tournament, which has left rugby fans little to be desired. The tournament proves to be one that keeps on giving. As a homage to the pinnacle of European rugby we run through five of the greatest Six Nations matches of all-time.

With England missing out on the 1999 Grand Slam by losing on the last day, they travelled up to Murrayfield with the intention of securing the slam this time round.

If you’re a fan of old school rugby, then this is the game for you. This fierce game between two old rivals looked more like a 15 a side UFC match, rather than the modern version of rugby that we see today.

As anticipated, England dominated the early play, but couldn’t turn that possession into points. After 20 minutes, Scotland finally got onto the scoreboard, but England hit straight back with Lawrence Dallaglio picking up from the back of the scrum and striding over to score.

With the heavens opening in the second half, Scotland dominated England in every single way. At full-time, Scotland had defeated England, 19-13 and denied them the Grand Slam.

With Scottish victories over the English a rarity, this result is considered one of the all-time great matches between these two arch-rivals. Only if you’re Scottish.

Picture it now. Wales were 10 points down against Scotland with five minutes left to play, surely the game was secured for Scotland? But what happened next, was quite possibly one of the greatest, if not the greatest, endings to a Six Nations match in history.

With Scotland heading into the last few minutes with a lead 24-10, it looked all over for the Welsh boys. However, with five minutes left to play, Leigh Halfpenny’s try was converted making it a 3-point game in Cardiff. Scotland had their second man sent off and as a result of this, Wales successfully converted a penalty, meaning the scores were now level at 24-24.

In the final 20 seconds of the match, Wales gathered the Scottish restart and pressed forward on the attack. After a number of phases, with Scottish players defending for their lives and Wales bombarding the defensive line, Shane Williams finally broke through and scored the try that gave Wales an incredible 31-24 victory.

Heartbreak for the Scottish. Absolute euphoria for the Welsh.

The opening game of 2018 Six Nations saw Ireland pitted against France, with both teams looking to build on an average 2017 campaign. This game would go on to inspire Ireland to claim the 2018 Grand Slam, and be the first stepping stone in what would be a meteoric rise to the top of the men’s world rugby rankings.

For 70 minutes in the Paris rain, the game was shaping into an easy win for the Irish structure over the French’s lack of composure, when a sudden, typical, French counterattack saw high-flying speedster Teddy Thomas run over the line. This seemingly had won the game for France.

However, this game was far from over, with the following events being described as one of the most memorable moments in Six Nations history.

With seconds on the clock and after 41 phases, a prime Johnny Sexton showed us why he was voted 2018 men’s player of the year.

Stepping back into the pocket, Connor Murray fizzed a pass to Sexton who calmly slotted a drop goal from 45 metres out.

Having many friends who support Irish rugby I remember the day well. Watching the game, you would’ve been wildly celebrating or stunned in absolute amazement.

Another fixture between these two makes it onto our list, with this match showing us where overconfidence will get you in rugby.

England dominated the first half with them showing off the brand of rugby that we’ve come to associate them with. A combination of the backs’ stylish plays, paired with dynamic and powerful forwards, resulted in Jack Nowell putting on a little footwork to step inside three players and score with just over a minute on the clock.

Within another 28 minutes England had scored a massive unanswered 31 points against the Scots, with tries from Tom Curry, Joe Launchbury and Jonny May.

The comeback was on though, with Stuart McInally charging down a lazy kick from Owen Farrell and out pacing both Farrell and May to get Scotland on the scoreboard before half-time.

Scotland came out into the second half looking like a brand-new team, with Finn Russell playing a pivotal role in a fantastic come back. Tries from Magnus Bradbury, Finn Russell and two from Darcy Graham saw Scotland bring the score back to 31-31 with 20 minutes left.

With Scotland piling on the pressure, it would only be a matter of time before they scored again, and in the 76nd minute, Finn Russell played a fantastic no-look pass to put Sam Johnson through the English line to scramble under the posts and score.

It looked like Scotland had done it, this would’ve been one of the greatest comebacks in not only Six Nations history, but rugby history. Sadly, it was not meant to be as replacement, George Ford, calmly ran over in the dying last seconds to break Scottish hearts.

With Farrell slotting the conversion, it meant that the game finished 38-38 and cemented this game as one for the history books.

With the 2021 Six Nations still yet to be decided, this game was set up as the game of the tournament before kick-off.

The first 20 minutes was exactly what you want from a potentially title deciding game, with Romain Taofifenua and Antoine Dupont running over for France, while Dan Biggar and Josh Navidi did likewise for Wales.

The second half was going to be even tastier though, with the TMO set to take centre stage. Firstly, to award the try to Welsh winger, Josh Adams, and secondly seeing that French lock Paul Willemse was sent off. Willemse having played such a major role in the French defence machine, that this decision would be a pivotal moment in the game.

With the scores at 30-20 to Wales, and France a man down, it was Wales’ to lose. However, two quick welsh yellow cards to Taulupe Faletau and Liam Williams would force Wales to play the remaining 7 minutes with just 13 players.

France knew that they needed to take advantage of the Welsh lack of discipline, and they made it count with captain fantastic, Charles Ollivon, crashing over the line to score and make it a 3-point game. Things were about to get tense.

After some fantastic ball retention by the French, with the Welsh players putting their soul and body on the line to halt this French attack. It would only be a matter of time before the numerical advantage would affect the game, with fullback Brice Dulin having mountains of space on the overlap and simply running in for the winning try.

With France and now Wales unable to claim the Grand Slam, it’s now down to the upcoming rescheduled game between France and Scotland to determine whether or not France can snatch the Six Nations title away from the Welsh.

(314)
£5.99
🌸 Ladies High Waist Shiny Super Stretch Cycling Shorts Dancing Neon Pants 🌸 Jersey Cycling Shorts Hot Pants 🌸 Suitable For Cycling, Gym, Running, Yoga, Dancing 🌸 Perfect For Daily Use, Exercise, Fitness, & Workout 🌸 Stretch Active Gym Shorts Tights -... read more
(as of 18th June 2021 - More infoProduct prices and availability are accurate as of the date/time indicated and are subject to change. Any price and availability information displayed on [relevant Amazon Site(s), as applicable] at the time of purchase will apply to the purchase of this product.)

(5873)
£12.80
Durable water repellent finish Taped seams Unlined Adjustable shock cord hood 2 lower pockets
(as of 18th June 2021 - More infoProduct prices and availability are accurate as of the date/time indicated and are subject to change. Any price and availability information displayed on [relevant Amazon Site(s), as applicable] at the time of purchase will apply to the purchase of this product.)

(982)
£7.49
1.Sweat-wicking and breathable sports socks: Made of high-quality materials, they have super elasticity and comfort. This makes the sports socks breathable, comfortable to wear all day, and can take sweat away from the skin, keeping you cool, dry and... read more
(as of 18th June 2021 - More infoProduct prices and availability are accurate as of the date/time indicated and are subject to change. Any price and availability information displayed on [relevant Amazon Site(s), as applicable] at the time of purchase will apply to the purchase of this product.)

(12623)
£8.00
The Impel is fast becoming a player favourite as the ideal all-weather soft-touch training ball The disruptive organic shapes work with the impactful graphic design to be more visual for the player Developed to help serious players get the most out o... read more
(as of 18th June 2021 - More infoProduct prices and availability are accurate as of the date/time indicated and are subject to change. Any price and availability information displayed on [relevant Amazon Site(s), as applicable] at the time of purchase will apply to the purchase of this product.)

(3238)
£7.90
Premium Japanese synthetic material offers great feel, flexibility and increased durability 4-Way stretch synthetic on knuckles for advanced performance: moisture wicking, breathability and flexibility Opti Fit adjustable closure for a thin, light an... read more
(as of 18th June 2021 - More infoProduct prices and availability are accurate as of the date/time indicated and are subject to change. Any price and availability information displayed on [relevant Amazon Site(s), as applicable] at the time of purchase will apply to the purchase of this product.)

(72)
£16.99
Bright and Convenient LED Gloves Hands-free Torch Gloves: When you put on LED light gloves, even if you are working in a small dark space or doing outdoor activities at night, as long as you stretch out your hand with LED torch gloves, it can provide... read more
(as of 18th June 2021 - More infoProduct prices and availability are accurate as of the date/time indicated and are subject to change. Any price and availability information displayed on [relevant Amazon Site(s), as applicable] at the time of purchase will apply to the purchase of this product.)

(4476)
£9.34
MOTIVATION - Getting your daily allowance of water can be difficult. Which is why we designed our Hydrate bottle to come with time markings helping you track your water intake and motivating you to hit your daily targets. DESIGN - Our leak proof wate... read more
(as of 18th June 2021 - More infoProduct prices and availability are accurate as of the date/time indicated and are subject to change. Any price and availability information displayed on [relevant Amazon Site(s), as applicable] at the time of purchase will apply to the purchase of this product.)

(333)
£24.98
【Two-in-one fitness massage】 Not only can these smart circles burn body fat quickly, but they can also help you achieve your ideal figure. You can also massage your waist to relax you. One product, two functions: side exercise, side massage. Burn fat... read more
(as of 18th June 2021 - More infoProduct prices and availability are accurate as of the date/time indicated and are subject to change. Any price and availability information displayed on [relevant Amazon Site(s), as applicable] at the time of purchase will apply to the purchase of this product.)
Related Topics:england rugbyFrench RugbyGuiness Six NationsIrish RugbyRugby Unionscotland rugbyWelsh Rugby
Up Next

The Greatest Goal Celebrations of All Time