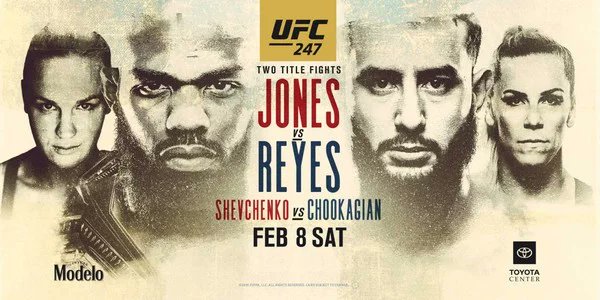 UFC pound for pound number one Jon Jones tops the bill at UFC 247 facing off against Dominick “The Dominator” Reyes.

The penultimate fight of the night see’s another title bout with Valentina Shevchenko defending her Flyweight belt for the third time against Katlyn Chookagian.

UFC 247 is being hosted in Houston, Texas at the Toyota Center on Saturday 8th February. The main card is set to start to start at 9pm CST (3am UK) with the main event likely to start at around 11.30pm (5.30am UK.)

Jon Jones sits as the heavy favourite to defend his title with current odds of 2/9 whilst Dominick Reyes is 3/1 to win.

Valentina Shevchenko is a huge favourite to defend her title with odds of 1/12 whilst Katlyn Chookagian sees herself as a big underdog to win the bout at 7/1.

Anthony Joshua: next fight set to be held at Tottenham Hotspur Stadium