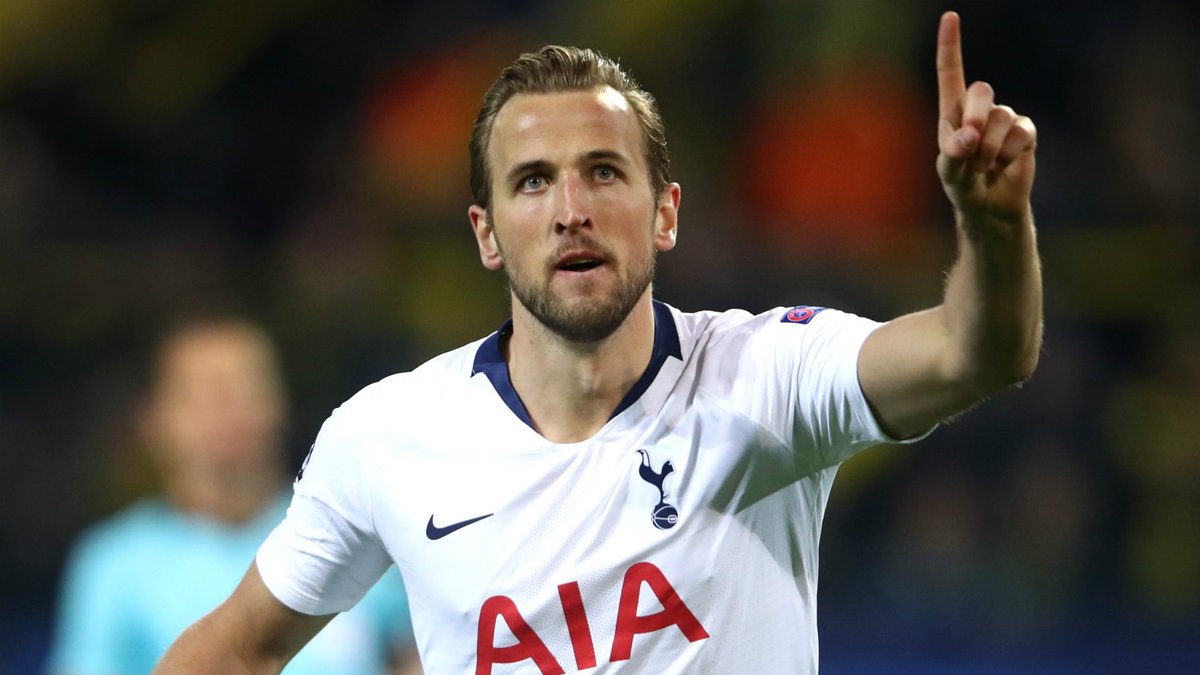 In this article we discuss the most valuable Premier League players in 2020.

Ederson consolidates himself as the second most valuable goalkeeper in the Premier League behind Alisson. The Brazilian goalkeeper see’s a tripling in his market value since joining Manchester City from Benfica in the beginning of the 2017/18 season.

Harry Maguire has impressed since joining Manchester United at the beginning of the 2019/20 transfer window, the English CB consolidating himself as captain at Old Trafford.

Maguire’s market value currently sits below his transfer fee of €85m, Solskjaer’s side paying the “Manchester United tax” to lure Maguire away from Leicester. Maguire’s actual market value at the time of purchase was believed to be roughly around €50m and so the 27 year old has already seen a €20m market value increase.

Richarlison is the only player in the top 30 who’s side resides in the bottom of the Premier League table (Everton in 12th.) The Brazilian winger/forward has been ever improving since joining the Toffees from Watford in July 2018.

The 22 year old has scored 10 goals in 27 Premier League games during the current season. Richarlison came to the Premier League in August 2017 for a fee of approximately €12m and now has an increased market value of five times that. 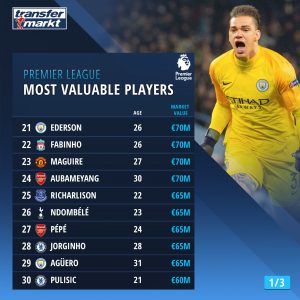 Virgil Van Dijk comes in as the most valuable Premier League CB with a market value of €100m. The Dutch defender has been worth his weight in gold since joining Liverpool and was a hot contender to win the 2019 Ballon d’Or, being pipped to the top spot by just seven points to Lionel Messi.

Heung-Min Son sees himself as the most valuable Asian footballer in the World and not just the Premier League. The left winger has been highly consistent since joining Tottenham Hotspur from Bayer Leverkusen for €30m. Son has scored at least 10 goals in each of his last three Premier League seasons at Spurs and remains on track to do so in the current season with 9 goals as of now. The 27 year old South Korean has seen his value increase five fold since joining Spurs in August 2015. 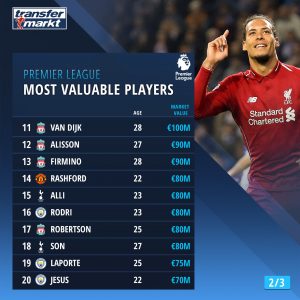 Trent Alexander-Arnold is the youngest player to be included in the list, him and Christian Pulisic being the only two 21 year olds in the top 30. The English RB is one of the most impressive players to emerge from Liverpool’s youth academy and has already added the Champions League to his trophy cabinet. The 21 year old also boasts the record of becoming the youngest player to play in consecutive Champions League finals since AC Milan’s Christian Panucci 24 years ago.

Alexander-Arnold is currently the most valuable defender in the Premier League and his value is likely to continue to rise given his current age.

Harry Kane is valued as the joint second most valuable player in the Premier League along with Liverpool’s Mohamed Salah and Sadio Mané as well as Manchester City midfielder Kevin De Bruyne.

The English CF has made his way through Tottenham Hotspur’s youth academy from the age of eleven and has now established himself as Spurs’ talisman. Kane’s breakthrough season came in 2014/15 with the centre forward scoring 21 goals in 34 appearances. Kane won the Premier League Golden Boot in consecutive seasons from 2015-2017 and has also reached 30 goals in a season (2017/18 ,) only seven other players have ever achieved such a feat in the Premier League.

Most Valuable Premier League Player in 2020

Sterling joined the Sky Blues from Liverpool for approximately €60m, the 25 year old has since made 230 appearances for City scoring 89 goals and making 72 assists. 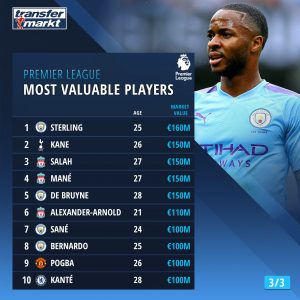 Players with the most Goals in A Premier League Season