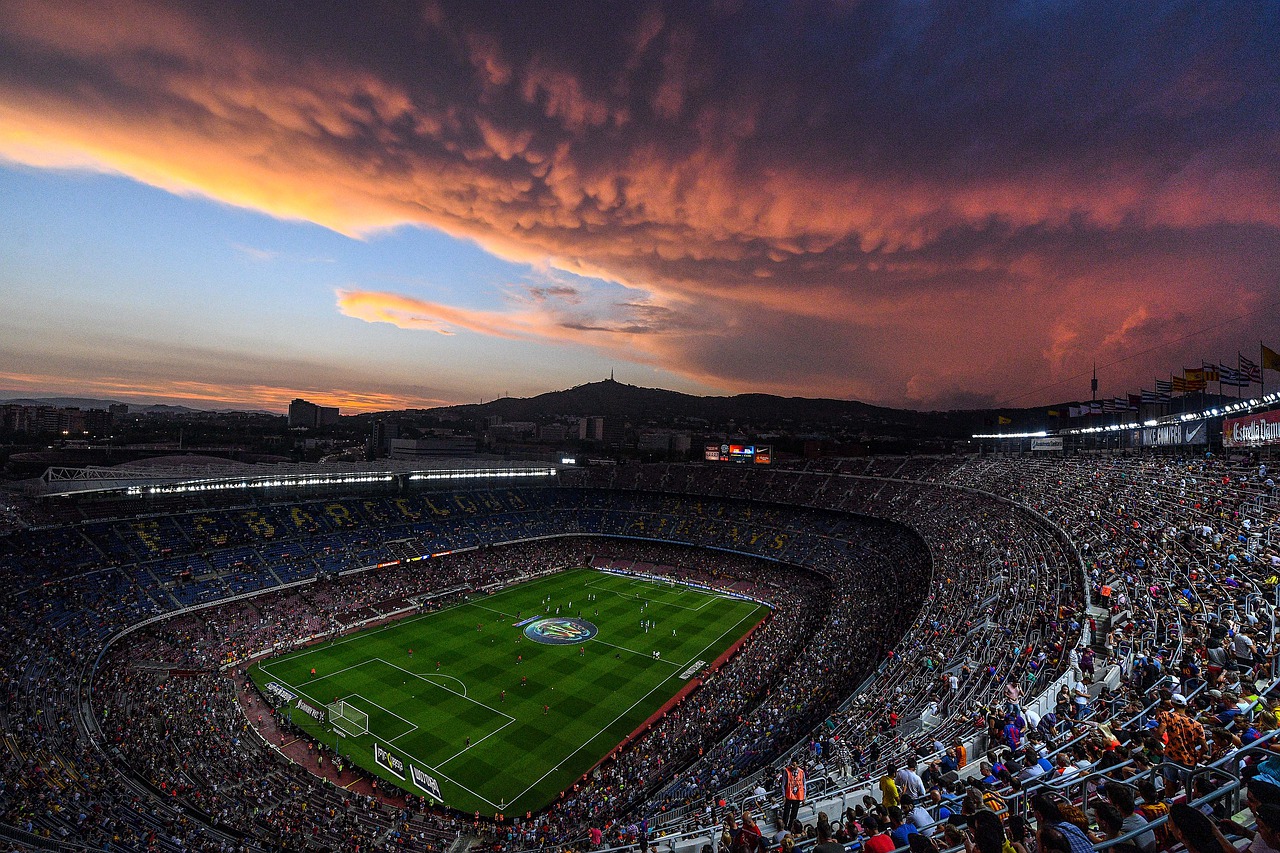 What is the Biggest Football Stadium in the World?

This article will look at the biggest football stadiums in the world by looking at each continent. Only purpose built stadiums will be listed however multi-purpose stadiums will be acknowledged. Continents with a high volume of enormous stadiums will appear more frequently in the list however there will be at least one stadium from each continent which has a professional set up. Sorry Antarctica!

Europe – Europe has 14 stadiums with a capacity larger than 70,000. We focus on 2 cathedrals of football

The Biggest football stadium in Europe

The Camp Nou is the largest stadium in Europe with a capacity close to 100,000. Making it one of the biggest football stadiums in the world. The Camp Nou was built in 1957 and translates to the ‘new stadium’. The Nou Camp is situated in Barcelona and is a symbol of the Catalan independence movement. The on field success of Barcelona can be seen in the stadiums museum. On a tour of the Camp Nou visitors can see 22 League titles as well as 4 Champions League triumphs.

The fans of Barcelona have seen some of the games greatest ever players. The likes of Messi, Iniesta and Xavi define the modern era. However, other greats such as Cruyff, Ronaldinho and Maradona have played on the hallowed turf. Despite a recent drop in performance, stature and financial disarray in Barcelona the Camp Nou is still iconic in the footballing world. 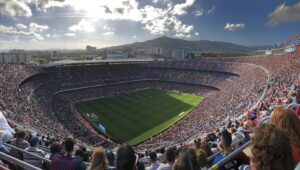 The biggest football stadium in UK

Known as the ‘home of football’ Wembley was rebuilt in 2002. The iconic Wembley arch is synonymous with English football and represents the end goal for any club. Not only do the national side play here but also deserving club sides from a variety of levels.

The FA Cup, League Cup, Play-Off and lower level FA cup competition finals are held at Wembley making it the mecca of English football. Of course the 1966 World Cup victory is the most significant fixture held under the Wembley name. The New stadium however, has held its fair share of ultimate clashes such as the 2011 and 2013 Champions League finals. 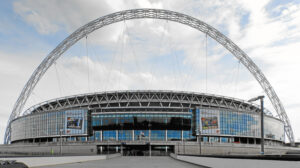 Wembley – The home of English football

Asia – Asia has 13 stadiums that can hold over 70,000. Most however, are multi purpose stadiums

The stadium was built in 1995 and opened in 1998 ahead of the Commonwealth Games. The stadium still holds some athletic competitions however its primary use is for the Malaysian national set up. Bukit Jalil National Stadium is certainly not the biggest stadium in Asia. Rungrado 1st of May Stadium situated in Pyongyang, North Korea, can hold a reported 150,000 at full capacity.

Premier League clubs including Liverpool, Chelsea, Arsenal and Manchester United have played pre-season tour games in this stadium. Bukit Jalil National Stadium is an appealing destination to these Premier League clubs aiming to expand their brand influence in Southeast Asia. 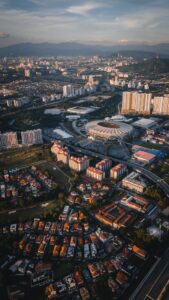 Oceania – Home to some of the most impressive stadiums in the southern hemisphere but what is the biggest football stadium?

The Australian national side does not have a national football/soccer stadium. The MGC can hold over 100,000 and is a multi-purpose stadium that primarily hosts cricket and Aussie Rules Football. Similarly the 83,500 capacity Stadium Australia is a multi purpose stadium. As football/soccer is a smaller sport in Oceania finding a purpose built stadium that are so prominent in Europe and the Americas I have decided to look at the biggest A League stadium.

The GMHBA Stadium (Kardinia Park) in Geelong, Victoria hosts A League outfit Western FC. Only 36,000 in capacity it shows domestic football is not significant in the continent. The stadium however, is the biggest in a regional city with Geelong situated outside Melbourne. Ultimately Oceania has some magnificent stadiums but does not have a substantial purpose built football stadium. 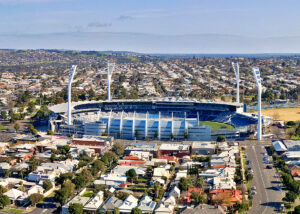 GMHBA Stadium – Home of the A League side Western United FC

Africa – Impressive stadiums resemble that the game is truly global?

The final of the 2010 World Cup was played at the FNB Stadium. 84,000 fans watched Iniesta put Spain 1-0 up over the Netherlands in a physical final. The stadium is also the home ground of dominant Kaizer Chiefs FC. FNB Stadium was built in 1989 and has had a significant role within South African politics. Mandela’s first speech after his release from prison was made at the FNB Stadium in 1990 and in 2013 a memorial service for the former President was held.

The stadium has held African Cup of Nations games in 1996 and 2013 and will also host 2 Lions tour fixtures in the coming weeks. Across the continent of Africa there are outstanding venues that are the biggest football stadiums in the world such as the Borg El Arab Stadium in Egypt. Do football executives need to look towards Africa to develop the game into a truly global game? 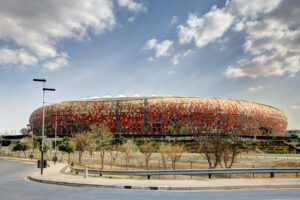 Home to – Club America and the Mexican national team

I am technically cheating as Estadio Azteca is a multi purpose stadium. However, the primary function is football. The stadium hosted both the 1970 and 1986 World Cup finals and is home to domestic side Club America. The infamous ‘Hand of God’ goal scored by Maradona against England was scored in the stadium situated in the nation’s capital. Mexico City is 2215 meters above sea level making the environment in which players perform very alien to many.

The stadium built in 1966 originally could host 105,000 fans however has decreased to ensure safety for the passionate fans. As football grows in popularity in the USA and Canada we can expect to see purpose built stadiums, as the current arrangement sees stadium sharing in coliseums such as the Rose Bowl. The quality of football venues in the continent bodes well for the 2026 World Cup being hosted by the 3 nations.

South America – Iconic stadiums and the most passionate fans

Home to – Fluminense and Flamengo

The Maracana was opened in June 1950. This was just in time to host the 1950 FIFA World Cup. It is estimated that when first opened it could hold between 155,000 – 200,000 people. Modern safety standards prevent such ludicrous viewing numbers now but this has not relegated the stature of the stadium. The 2014 World Cup final was played at the Maracana. 74,738 fans watched Mario Götze score the winner in extra time. Brazil did not have a good tournament, losing to eventual winners Germany 7-1, however the World Cup itself delivered to the maximum and the thriving Maracana was symbolic of the general positive mood of the tournament. 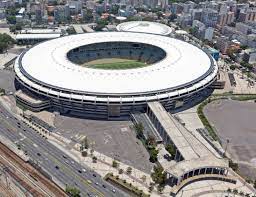 The Estadio Monumental is the biggest football stadium in South America and one of the biggest stadiums in the world. Domestic side Club Universitario de Deportes use the stadium as do the Peru national side occasionally. the 85,000 seater was selected to host the 2019 Copa Libertadores final between Flamengo and River Plate. It took 9 years to construct the stadium and it was officially opened on the 2nd of July 2000. Outside the stadium is a statue of Teodoro Fernández. A legendary Peruvian forward who played for Club Universitario de Deportes. 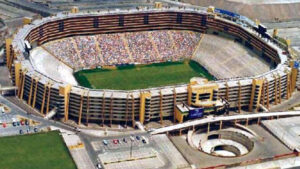 We hope you enjoyed this article ‘What is the Biggest Football Stadium in the World?’ What is your favourite stadium included in the list? Let us know!

(629)
£14.43
【MOTIVATIONAL QUOTE & TIME MARKER】The 2.2 litre water bottle featured with unique inspirational quotes and time markers on the body, which will remind you to stay hydrated and drink enough water throughout the day, A must have for any fitness goals i... read more
(as of 16th September 2021 - More infoProduct prices and availability are accurate as of the date/time indicated and are subject to change. Any price and availability information displayed on [relevant Amazon Site(s), as applicable] at the time of purchase will apply to the purchase of this product.)

(3488)
£11.99
✅ PERFECT FIT GUARANTEE. We back ourselves. We will help you get the perfect fit or your money back! ✅ GREAT FIT – SAFEJAWZ offers amazing retention and a secure fit thanks to our FLUID FIT️ technology. It will fill the contours of your teeth and sta... read more
(as of 16th September 2021 - More infoProduct prices and availability are accurate as of the date/time indicated and are subject to change. Any price and availability information displayed on [relevant Amazon Site(s), as applicable] at the time of purchase will apply to the purchase of this product.)

(56)
£5.99
Official Premier League 2021/22 Adrenalyn XL Trading Cards Collect All x464 Trading Cards! All 20 Premier League Clubs To Collect! QR Code In Each Packet Unlocks A Digital Packet! Includes: Wayne Rooney Lenticular Limited Edition Card AND Kevin De Br... read more
(as of 16th September 2021 - More infoProduct prices and availability are accurate as of the date/time indicated and are subject to change. Any price and availability information displayed on [relevant Amazon Site(s), as applicable] at the time of purchase will apply to the purchase of this product.)

(9568)
£10.00
Training football: The Mitre Impel is the ideal all-weather soft-touch training football, suitable for a kickabout at home or practicing your skills at football training with your team. Construction: Constructed with a soft EVA foam backing and Vimin... read more
(as of 16th September 2021 - More infoProduct prices and availability are accurate as of the date/time indicated and are subject to change. Any price and availability information displayed on [relevant Amazon Site(s), as applicable] at the time of purchase will apply to the purchase of this product.)

(2122)
£1.95
Premium Rucksack. Large main compartment with drawstring closure. Drawstring design for shoulder or backpack carry. 210D Polyester 42 x 34 cm - Ideal School or Gymbag - Holidays/Sport - Great to Print onto if needed. Full Bag and Clothing Ranges in o... read more
(as of 16th September 2021 - More infoProduct prices and availability are accurate as of the date/time indicated and are subject to change. Any price and availability information displayed on [relevant Amazon Site(s), as applicable] at the time of purchase will apply to the purchase of this product.)

(22406)
£10.99
100% leak proof BPA free water bottle hygienic spout cover flips open with one finger and locks closed for safety vented, smooth liquid flow for rapid hydration the width of a can, it has a soft feel for grip and fits any cup holder or backpack these... read more
(as of 16th September 2021 - More infoProduct prices and availability are accurate as of the date/time indicated and are subject to change. Any price and availability information displayed on [relevant Amazon Site(s), as applicable] at the time of purchase will apply to the purchase of this product.)
Related Topics:biggest football stadiumBukit JalilCamp NouEstadio AztecaEstadio MonumentalFirst National Bank StadiumFootballFootball stadiumsMaracanaWembley
Up Next

The Best Italian Footballers of All Time

A student and Loughborough University with an aim of writing on topics than stimulates debate and discussion amongst fans of sport. Most interested in: Cricket, F1, Boxing/MMA, Golf, Rugby and Football. Most articles produced will be rooted in statistical and data analysis.