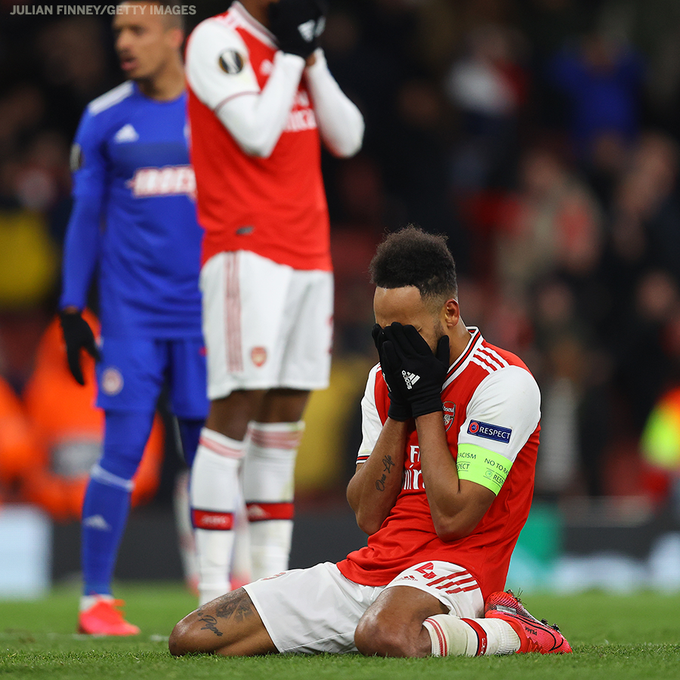 Arsenal faced a shock defeat to Greek side Olympiakos in the round of 32 knockout stage, the Gunners conceding a late goal in extra time to see them exit the competition.

Arsenal were odds on to qualify for the round of 16 however faced a true Greek tragedy conceding two goals at home and face an early exit from the Europa League as a result.

Arsenal conceded in the 53rd minute of the match with Olympiakos defender Pape Cisse converting his header into the net from a corner. The game ended 1-0 after 90 minutes and as a result meant extra time followed.

Arsenal thought the game had been saved in the 113th minute with Pierre-Emerick Aubameyang latching onto a looping ball on the edge of the six yard box with an overhead kick, sending the ball straight into the net.

Olympiakos silenced the Emirates Stadium in the 120th minute of extra time with striker Youseff El Arabi meeting a pinpoint cross inside of the box, the Moroccan hitting the ball first time into the bottom right corner beating Arsenal goalkeeper Bernd Leno.

Arsenal had the opportunity to turn the tie back around in the final moments of the game with an unmarked Aubameyang finding the ball falling to him five yards out, the forward placing his shot wide of the post in what should have been a goal.

The result see’s Arsenal face their first defeat of 2020 as well as the most likely root to playing Champions League football next season coming to an abrupt halt.

Europa League Round of 16 Draw