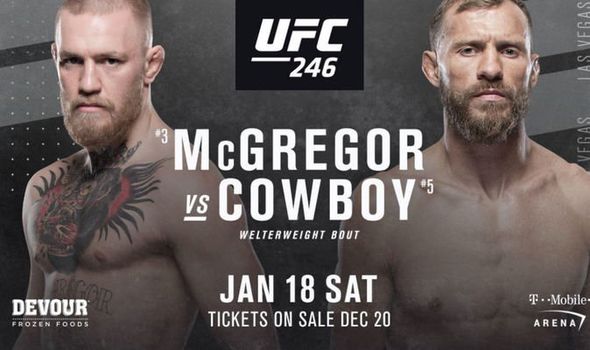 This Saturday see’s the return of the ‘Notorious’ Conor McGregor in the Octagon, in what will be the Irishman’s first UFC fight in over a year. His fight comes against Donald ‘Cowboy’ Cerrone, the Welterweight fight looking to be a great match up.

UFC 246 is to be held on Saturday January 18th at the T-Mobile Arena in Las Vegas, Nevada.

The Preliminary card is set to start at 1am UK time (Sunday 19th January.) The main card bouts are set to start around 3am UK time, with five bouts in total. The main event is likely to start between 5-6am, dependant on the duration of the previous bouts.

BT Sport are broadcasting the event via their pay-per-view service. UFC 246 will cost £19.99 on BT Sport Box Office. The fight can be purchased by anyone who has a Sky, BT or Virgin TV subscription.

Conor McGregor is the favourite heading into the bout with odds of 1/3 to beat Cerrone. Cerrone holds current odds of 5/2 to beat Mcgregor.