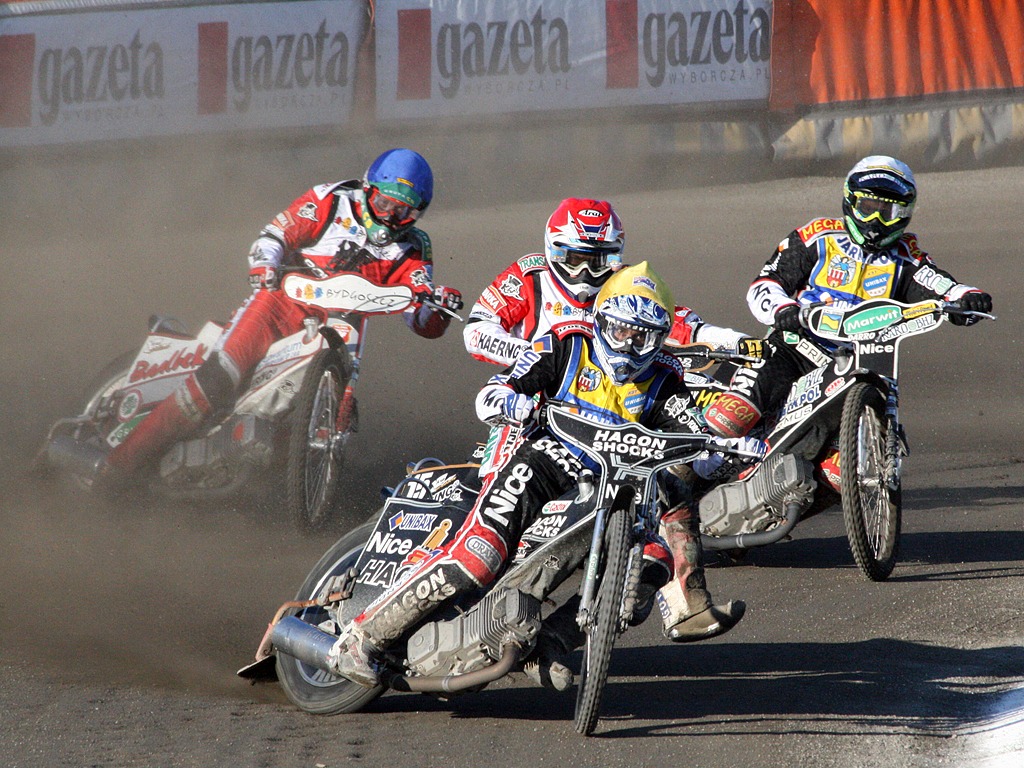 In the week that Masarna lifted their first Swedish league title for 20 years, the last four teams in the Polish Ekstraliga finally battled it out for the final end-of-season honours. After initially being postponed as a result of yet more poor weather, Stal Gorzow – having lost their first six meetings of the season – took to the track in the Grand Final against three-time and reigning champions Unia Leszno. Meanwhile, Zielona Gora and Sparta Wroclaw fought for third place and while they could be forgiven for taking their foot off the pedal, the action they produced suggested otherwise.

Zielona Gora 37-32 Sparta Wroclaw (Abandoned after Heat 12)
Zielona seized a narrow early initiative in an abandoned first leg of their 3rd/4th play-off, earning a 37-32 victory in a meeting plagued by weather problems.

Rohan Tungate enjoyed the early conditions, leading out the opening heat in a new track record of 57.43s, a full second quicker than Jaroslaw Hampel’s previous record set in 2013. Remarkably, this was one of seven heats on the night that beat Hampel’s record.

Issues became evident as early as the juniors’ race when Gleb Chuganov got out of shape while leading, ushering Norbert Krakowiak into the fence backwards. Michal Curzytek could only ride straight into the stricken Krakowiak’s bike, sending himself somersaulting over his handlebars. Krakowiak was taken from the stadium in an ambulance, while Curzytek fell in the two-man restart, gifting Zielona Gora a rare 3-0 heat victory. Two heat advantages in three races gave Sparta Wroclaw the lead for the first time but heat five saw Zielona Gora reserve rider Jan Kvech became the latest victim of the track, clipping the airfence on lap three, resulting in a front row view of the floor. Michal Curzytek then yet took another spill on the second bend in heat seven as the rain began to fall heavily again, calling the safety of the track into serious question for the first time.

These questions continued in heat 10 as world number four Maciej Janowski (4), having done brilliantly to get around the outside of Piotr Protasiewicz (4+1), squared up mid-turn at start of the second lap; the veteran had nowhere to go but straight into Janowski. Thankfully, both riders were able to walk away from the incident.

Where usually, a result can be confirmed after eight heats, play-off rules stipulate that 12 races must be completed in the play-offs to constitute a result so after a pair of shared heats, Pawel Slupski called time on the meeting.

Praise must be heaped on the riders that were able to tame the track on such an awful night. In a consistent Zielona Gora side, Rohan Tungate led from the number one spot with 8+2 and Michael Jepsen Jensen was good value for his eight as well. Dariusz Sledz’ side needed someone else to step up and on Tai Woffinden’s machinery, Dan Bewley obliged with a fantastic 12+1 from five rides and the Brit was backed up by Max Fricke, who came in with 10.

Not a meeting that will be remembered for the right reasons, but everything remained tight going into the second leg.

Stal Gorzow 46-44 Unia Leszno
Stal Gorzow produced a stunning late fightback to overturn an eight-point deficit with three heats remaining to take the slenderest of leads to Leszno for the second leg of the Grand Final.

After the first three heats bore a pair of consecutive 5-1s for Leszno with little in the way of action, heat four saw the heat turned up as world champion Bartosz Zmarzlik was out-gated by both Jaimon Lidsey and Dominik Kubera but within a lap, he’d gone the long way around the Australian and cut inside the visiting junior to take his place at the front to ensure a share of the spoils. Zmarzlik would make a better start in the very next heat as he led Jack Holder in the for the hosts’ first maximum of the evening to cut the deficit to just four points.

Heat eight saw both Wiktor Jasinski and Jaimon Lidsey take falls on the same corner but independent of one another. The home junior was the only one excluded as referee Krzysztof Meyze thought Lidsey was taking evasive action to avoid Jasinski’s spill.

It got all very tight going into the second leg

That was immediately followed by the race of the night. Having missed the start from the outside again, Zmarzlik rounded Sayfutdinov (who proceeded to clatter into Zmarzlik, to no effect) to split the visitors’ 5-1 scenario and appeared to have got past Kolodziej, only for the visiting number two to immediately cut back up his inside. Szymon Wozniak tried to make headway past Sayfutdinov for third, but ultimately ran out of laps.

Heat 12 saw Jack Holder go from bridesmaid to bride as he went up the inside of Kolodziej from nowhere to end the Pole’s paid maximum and ensure the gap – which stood at eight points – didn’t widen. But more than that, he inspired yet another incredible Stal Gorzow comeback.

Unia Leszno were arguably the better side on the night, but Holder’s victory – his first of the night – then inspired genius from Zmarzlik. After Piotr Pawlicki had made the start, Zmarzlik got up the inside of his countryman and forced him wide, allowing Anders Thomsen to come through for the lead and a 5-1.

Pawlicki was edged wide again in the penultimate heat; this time from the start as Szymon Wozniak out-gated him, allowing Jack Holder to come through and take the victory for another maximum. All square going into the final race…

As probably not expected given previous outings, Bartosz Zmarzlik made the best start of the four and was away and clear. Anders Thomsen then edged past Emil Sayfutdinov in the closing stages to take a 4-2 and give his side a two-point advantage going into Sunday’s grandstand finale.