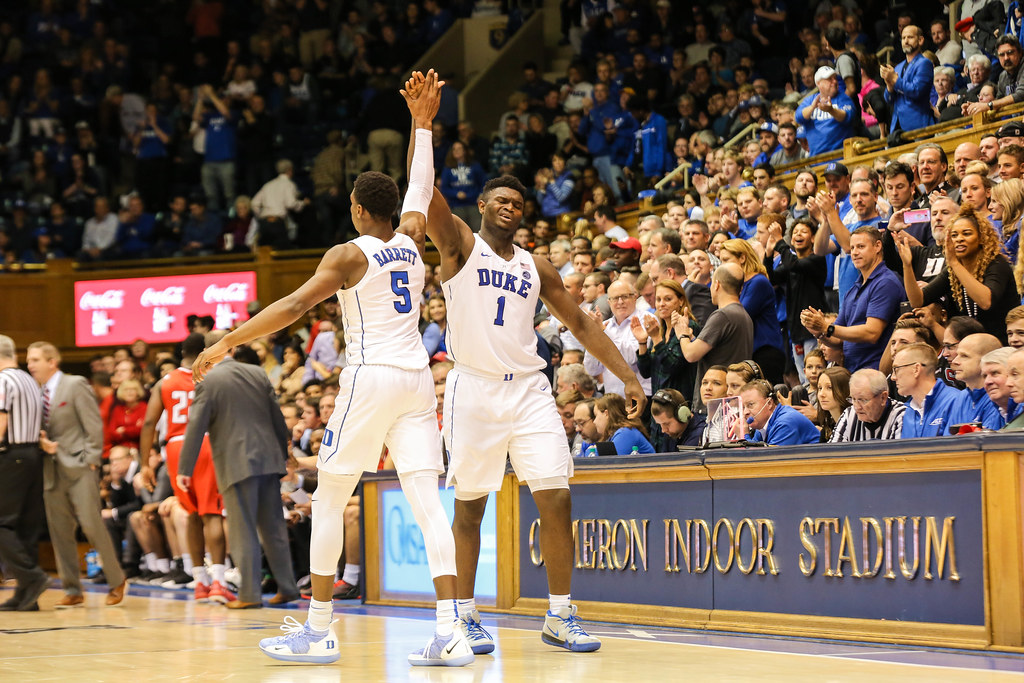 With the NBA season over, the LA Lakers were crowned champions. Over the course of the year many rookies joined new teams to help strengthen their roster and boost their hopes of making playoff berth. The 2019 NBA draft provided fans with lots of hope, for fresh new talent emerging into the NBA.

As the biggest league in the world, rookies from all different teams tried to push their way into the starting five and impress in their first seasons. Rookie of the Year Ja Morant won 99 out of 100 first place votes to win the best rookie award. Drafting and selecting the best players from the draft is an integral part of a franchise, and many clubs received their rewards.

We have now take a look at the best rookies from across the whole season and playoffs. Were the NBA right to vote Ja Morant for Rookie of the Year, or were there other stars that earned their right to take home the award?

The 2020 NBA Rookie of the Year Award goes to JA MORANT 😤 pic.twitter.com/NRPCKcctwW

Leading the way in the votes was Memphis Grizzlies point guard, Ja Morant. Ja exploded onto the scene this year after getting drafted as the overall second pick in the 2019 draft. He joined with fellow rookie Brandon Clarke in Memphis and soon became their star player.

The 6ft 3in American mounted a playoff challenge this season and just missed out to the Portland Trailblazers in the Western Conference. Playing with the likes of Jae Crowder, Dillon Brooks, Jonas Valanciunas and Jaron Jackson Jr, Morant stood out in a brilliant first season.

Morant shot efficiently throughout the year, averaging 47.7% from the field. He led Memphis in scoring with 17.8 points a game, and a career-high 35 points against Portland in their last game of the season. He also led the team in assists, producing 7.3 and grabbed 3.9 rebounds per game to round off his stats.

But apart from that, his ball handling abilities and athleticism make him one of the hardest players to guard in the league. Morant’s ball faking skills and composure driving to the basket give him an attacking edge that’s hard to stop. His defensive game is solid as well, providing some pivotal stops over the season to help the Grizzlies win games.

Leading his team to a playoff challenge in his first year was one of the primary reasons he was selected as the best rookie of the year. He produced consistent highlight plays and became a fan favourite to the majority of NBA fans and will no doubt be in the run for an all star selection next season.

As the closest competition to Morant for Rookie of the Year, Zion Williamson had a great second half of the season. He was picked as number one in the 2019 draft and tipped by many to be a sensation in his rookie year. Without his knee injury, which kept him out for the first three months, he could’ve arguably won the best rookie award.

On his mid-season debut for the New Orleans Pelicans, he scored 22 points, scored four threes (in as many shots) and grabbed seven rebounds. Although he only played 24 games, he averaged 22.5 points, with a 58.3 field percentage and 6.3 rebounds per game.

His athleticism and strength make him unstoppable in the air and going to the basket. The 6ft 6in power forward’s presence on the court, helps him on defense and his ability to shoot the three is important for a man of his size. Zion’s return to the Pelicans was one of the key factors in their late surge for the playoffs, but unfortunately missed out.

Named as a ‘generational talent’, Zion will definitely be back stronger next year and who knows how high he could go. Playing with the likes of Lonzo Ball, JJ Reddick and Brandon Ingram, the Pelicans will be a much better squad next year.

Best of the rest

Finishing second in the overall rookie leaderboards was Miami Heat’s Kendrick Nunn. In their deep playoff run, Nunn didn’t actually get as many minutes as he did in the regular season. However that doesn’t take away his contributions to the Miami team throughout the course of the year.

As they finished 5th, he started in every game for the Heat leading up to the break in March. The 25 year old went undrafted in 2018, playing in the G-League. After being picked up by Miami for this year, he scored 15.3 points per game during the regular season. As well as this he scored 6.1 points in the playoffs.

Nunn has been a great addition to a resilient Heat side, and his ability to score the ball is a huge asset. Kendrick’s rise from going undrafted to rivalling players like Morant and Zion is the reason why he was such a strong contender for Rookie of the Year.

From undrafted to 3x Rookie of the Month. Happy birthday to Kendrick Nunn. 📷: @darenscarberry pic.twitter.com/1UJn9iqR8s

Another stand-out rookie this season for the Heat, was Tyler Herro. More notably for his performances in the playoffs, where they reached the NBA Finals but lost 4-2 to the LA Lakers. He scored 37 points against the Boston Celtics in the Conference Finals, a rookie record for Miami.

The 6ft 5in point guard, averaged 16 points, 5.1 rebounds and 3.7 assists per game in the playoffs. During the course of the year he averaged 13.5 points and 4.1 rebounds to mount a late climb in the rookie leaderboards.

His three point shooting ability and confidence on the court was useful to Miami coach, Erik Spoelstra. He could utilise his skills in the playoffs to help his team overcome their opponents. Herro, who was drafted 13th pick, resulted in becoming a key figure in the Heat team.

More importantly, Miami have now acquired two fresh new talents to their roster. They will no doubt continue to improve over the course of the next couple of seasons.

Coby White was the 7th pick of the draft and had a solid first season in the NBA. It was cut short unfortunately after they revealed only 22 teams would return after the coronavirus-induced break. Although Chicago didn’t have a great season, White was one of the stand-out players in their roster.

Following the turn of the year, Coby began to play really well. As Chicago are a team that are re-building, they gave him lots of chances to prove himself at the top level. He averaged 13.2 points per game and broke out as a new, up and coming guard.

His shooting percentage of 39.4 in the field is fairly low, but he began to show glimpses of what he can provide for Chicago in the last few games of his rookie season. He scored 35 points against OKC in February and over 20 points in nine of his last ten games. If he can continue that run of form next year, Coby will become a much better player.

One year ago: Coby showed us in the preseason what he's capable of 🔥

Lastly, there is 6ft 8in power forward Rui Hachimura. Having been drafted 9th in the draft, Rui went on to become one of Washington’s key players for last season. If he didn’t miss 23 games with an injury, he may have had a better chance of rivalling the top rookies.

He recorded 13.5 points and 6.1 rebounds per game, including a 30 point charge against the Clippers in December. He has provided Bradley Beal with good assistance in the absence of John Wall and just missed out on playoff berth.

His contributions on both ends of the court for the Wizards have been heard from fans. As their team return to full strength, Hachimura will only get better. His performances have helped them massively this season when they have struggled. They will definitely need them again if they want to mount a playoff challenge next year.

We hope you enjoyed the article ‘The Best Rookies of the NBA Season 2019/20’. Do you think Ja Morant deserved to win Rookie of the Year? Let us know!

Has Gegenpress reached its end?

The 10 best footballers that have never won the Premier League