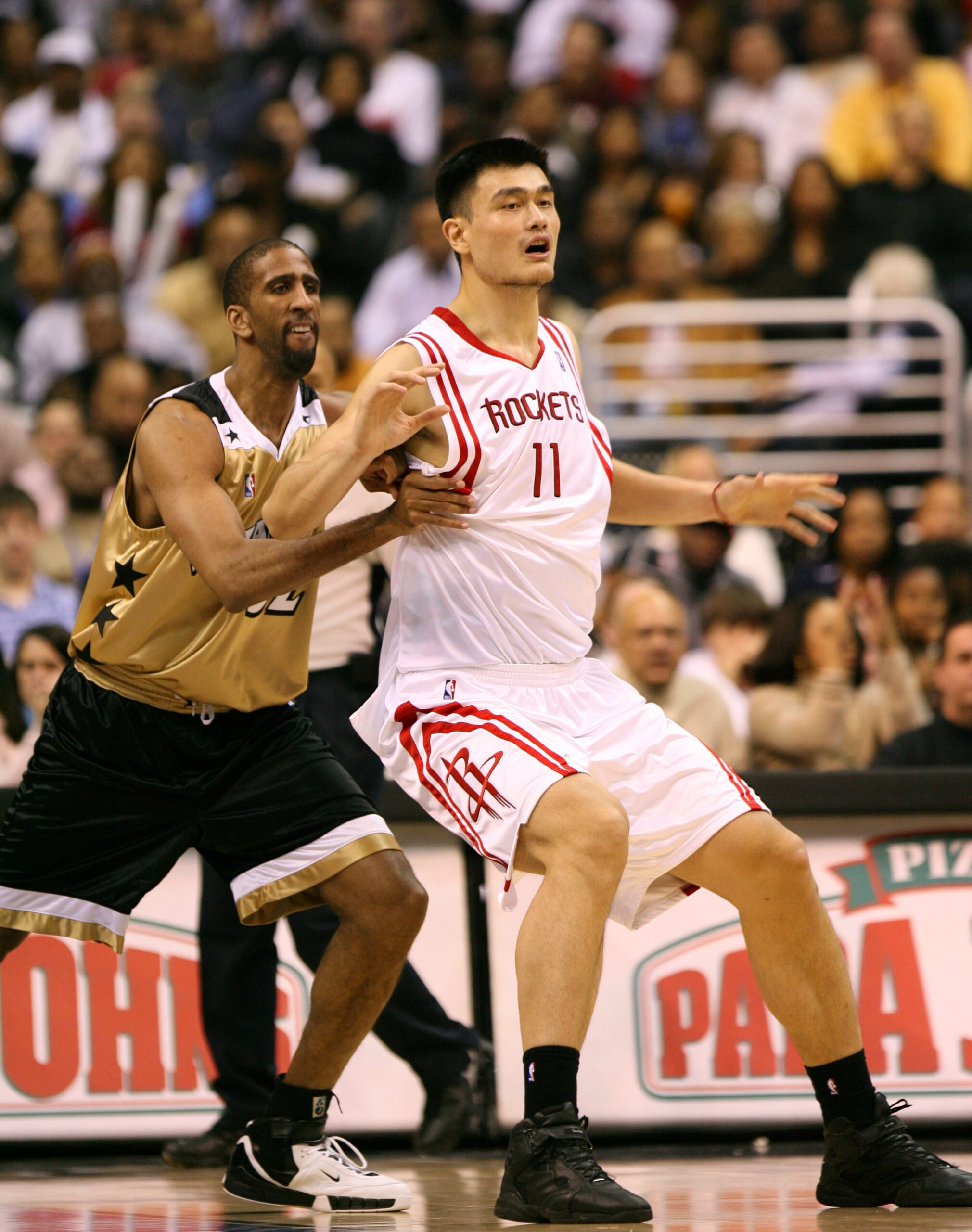 The Tallest NBA Players of All Time

Tallest NBA Players of All Time

When regarding the world of sports, being tall is a pure fundamental of playing basketball. During the 2017-18 season, the average basketball player stood at 6 ft 7 inches (as some food for thought, the average american male stands at just under 5 ft 10 inches.)

It is currently estimated that the number of American men between the ages of 20 and 40, who are 7 foot or taller, remains less than 70. A rare breed indeed, just nine players in the NBA’s history have stood at 7 ft 5 or more.

Basketball truly is the land of the giants. Body height is of-course generally a huge advantage when playing basketball, however does it ever become detrimental? At what height is a player considered “too tall” to make it into the Hall of Fame? We have notably seen many ‘giants’ pursue basketball in the hope of an illustrious career, however many have fallen short due to injuries or the physicality of the NBA.

Usually something has to give in the trade-off with sheer height. Speed and agility are some examples that may be hindered, the physicality of the NBA can also be put into question. Nevertheless the giants of the sport are always welcomed with awe and appreciation. Often a novelty for fans, it is not to say however, that the players lack talent. Some of the tallest players to grace the court have had highly successful careers.

In celebration of these modern day giants, we run through the tallest nba players of all time.

Tacko Fall is the latest ‘giant’ to emerge onto the NBA scene. The Celtics rookie joined the notorious eastern franchise in June 2019. He has since become a fan favourite at the The Garden, “We want Tacko!” has regularly been echoed by the Boston faithful.

The Senegalese born center currently stands as the tallest player in the NBA roster, whilst also setting all-time records within the NBA for largest foot size (22US) and wingspan (8 ft 2.25 in, 250 cm.)

Fall has become one of the unlikely stars of this years NBA season, despite his lack of playing time on the court. Fall represents the whimsical nature of the league, that passes every once in a blue moon, a crowd pleaser comes along regardless of skill, athleticism or basketball IQ. It is not to say that Fall is devoid of talent, the center has shown promising signs in flashes thusfar. However whether or not he will become a regular in the NBA roster, remains to be seen. ‘The modern giant’ of the current NBA era nevertheless is an exciting prospect and addition to the league, following in the huge footsteps of Yao Ming and Manute Bol.

Bhullar initially went undrafted during the 2014 NBA pick, however he was later scooped up by the Sacramento Kings in August of the same year. The center would only manage three games for the Kings, scoring just one basket. The Sacramento Kings would waive the centers contract just a few months later. That remains Bhullar’s NBA record to this day.

Sim Bhullar became the first player of Indian descent to play in the NBA. He currently plays basketball for the Yulon Luxgen Dinos in the Taiwanese Super Basketball League.

Pavel Podkolzin remains as one of the tallest NBA players to grace the NBA, the Russian giant’s playtime however, remained one of the shortest.

Podkolzin spent two seasons with the the Dallas Mavericks between 2004-2006, during this time the center managed only six games, scoring just four points and managing nine rebounds for the franchise.

The Russian center now applies his trade in the Russian Super League.

Chuck Nevitt played college basketball at Northern Carolina State University before being drafted by the Houston Rockets during the 1982 third round draft pick. The centers professional career spanned over the course of twelve years (1982-94) playing for the likes of the Houston Rockets, Los Angeles Lakers, Detroit Pistons, Chicago Bulls and San Antonio Spurs.

A career that spanned over a decade, Nevitt however only managed 155 games during his twelve year tenure, averaging just 5.3 minutes per game. However Nevitt still remains the tallest player to ever win a NBA Championship, being part of the LA Lakers’ 1985 winning roster (that notably featured Kareem Abdul-Jabbar and Magic Johnson.)

Yao Ming is by-far regarded as the most talented player on the list. Ming began his basketball career in his home city of Shanghai, spending five seasons (1997-02) with the Shanghai Sharks before making the illustrious move over to the NBA.

Ming entered the NBA as the number one overall pick during the 2002 draft, hype and anticipation surrounded the center in abundance, the Rockets snapping at their heels to get Ming on their roster. Ming went onto have a highly successful career in the NBA, which unfortunately ended prematurely due to a series of foot and ankle injuries.

‘The Dynasty’ boasts many accolades with is beloved Houston Rockets, whereby he spent his whole NBA playing career (2002-2011.) The center reached the NBA play-off four times with the Rockets, whilst his career stats averaged 19 points, 9.2 rebounds and 1.6 assists.

Ming became the tallest player to ever play within a NBA All Star Game (becoming an 8x NBA All Star) as well as becoming the tallest ever player to be inducted into the NBA Hall of Fame. Yao Ming remains one of the most prolific Chinese athletes in the world to this day. In 2017 he was elected as the chairman of the Chinese Basketball Association.

Slavko Vraneš was born in SR Montenegro, applying his trade as a basketball player across Europe before being brought over to the NBA.

The center was selected as a second round NBA draft pick in 2003 by the New York Knicks, however the pick was later waived in December 2003. The Montenegrin was later snapped up by the Portland Trail Blazers during the 03-04 season. Vranes however, only played in one game for the Oregon franchise before being released. The center has not been seen in the NBA since.

Shawn Bradley grew in up Utah and adopted the sport of basketball from a young age. The center flourished in high school and college on the court, remaining as one of the most successful basketball players in Utah high school history. As a result Bradley was heavily recruited by colleges from across the country, the center opting for Brigham Young University (BYU) in Utah. Bradley became known for his blocking prowess in his freshman year whilst at BYU, averaging 5.2 blocks per game as well as becoming the leading block-stopper in the nation (177.) After his freshman year at BYU, Bradley stepped away from the sport for two years in order to fulfill a mission for his church.

‘The Stormin’ Mormon’ was seen as a somewhat two pronged sword, an enticing yet risky pick for franchises in the NBA draft of 1993. His height intrigued, yet his weight (235 pounds) left many open-ended questions as to whether Bradley could ultimately compete with the physical athleticism of the NBA. Bradley was drafted by the Philadelphia 76ers as the second overall pick, behind Hall of Famer Chris Webber.

Over the course of his career Bradley averaged 8.1 points, 6.3 rebounds and 2.5 blocks per game. The centers career spanned over 12 seasons spending his time with the likes of the 76ers, Nets and Dallas Mavericks (where he spent nine seasons.)

Manute Bol falls just short of being the joint tallest basketball player of all time at 7ft 6.75 inches. Bol was born in Sudan, coming from a extraordinary tall family. The center, when talking of his family, stated “My mother was 6 ft 10 in (2.08 m), my father 6 ft 8 in (2.03 m), and my sister is 6 ft 8 in (2.03 m).” It has been noted that Bol’s ethnic group, the Dinka, and the Nilotic people of which they are a part, are amongst the tallest populations in the world.

Bol was brought to the USA in the mid 80’s and was eventually drafted by the Washington Bullets in 1985 as the 31st overall pick. Bol was sent to comprehensive strength training by the Bullets, the center weighed just 180 pounds (82kg) upon arriving stateside.

The Sudanese giant lived a successful basketball career which spanned over the course of a decade (1985-95,) playing for four franchises in total within the NBA (Washington Bullets, Golden State Warriors, Philadelphia 76ers and Miami Heat.)

Whilst the center was never a prolific player on the offensive, Bol flourished on the defensive side. The center ended his career with an impressive average of 3.3 blocks per game.

Manute Bol passed away in 2010 from acute kidney failure. His son Bol Bol (7 ft 2) currently plays in the NBA with the Denver Nuggets.

Gheorge Muresan tops the list as the tallest NBA player of all time. The Romanian giant grew to a remarkable 7ft7 inches, which was due to a pituitary gland disorder. Muresan played basketball throughout Europe before being drafted into the NBA during the 1992-93 season by the Washington Bullets.

The Bullets again capitalised on signing another giant, having notably signed Manute Bol a few years previous. Muresan would fill the Manute Bol void for the Bullets, spending five years in America’s capital before leaving due to injury in 1998.

During his time with the Bullets Muresan held a respectable career, his peak season arriving during in 95-96 season, whereby the Romanian averaged 14.5 points and 9.6 rebounds. The center also led the league in field-goal percentage, shooting 58.4% from the floor. As a result, Muresan received the NBA’s Most Improved Player for the season.

Muresan’s career would be brought to an abrupt halt due to recurring injuries. The Romanian would land two seasons with the New Jersey Nets from 1998-2000, playing only 31 games, before bowing out from the NBA.

After retirement from the NBA Muresan founded the Giant Basketball Academy in Ashburn, Virginia. The facility dedicates itself to teaching the sport to children of all ages.

We hope you enjoyed the article ‘Tallest NBA Players of All Time.’ Which of these giants do you think had the best NBA career? Will we ever see taller players to play within the NBA? Let us know!