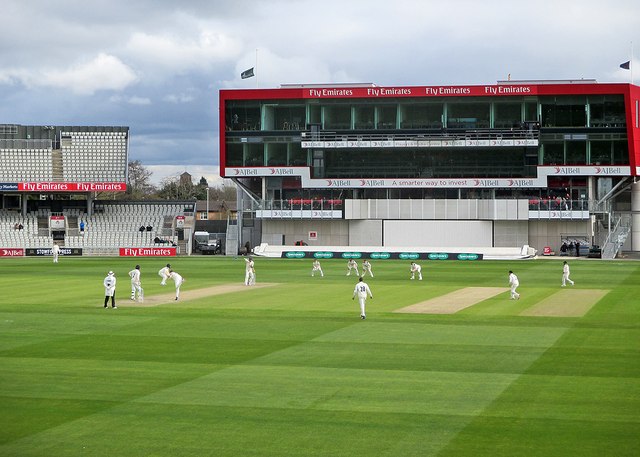 England have claimed an unlikely victory in the 1st #raisethebat Test against Pakistan. England were in trouble at 117-5, chasing 277 for victory in the 4th innings. The game at that stage was in Pakistan’s favor. But Jos Buttler and Chris Woakes stepped up to the occasion and rescued England by sharing a 139-run stand. Woakes remained unbeaten on 84 as an enthralling day of cricket ended with England winning the game by 3 wickets.

Irrespective of how this match ends, this is outstanding from Buttler and Woakes. They could have defended and found one ball with their name on it. Instead they backed themselves and counter-attacked brilliantly.

Pakistan elected to bat first after winning the toss and found great success in their first innings. Only 49 overs of play was possible on Day-1 as bad light forced the players to leave the field early but Pakistan were in a respectable position at 139 for 2 at the end of day’s play. While Babar Azam failed to add to his overnight score of 69, Shan Masood carried on and stroked his way to a wonderful 156. He batted throughout the innings and carried Pakistan to a commanding total of 326. Wickets were well distributed amongst the English bowlers.

England’s batting performance in their first innings was nothing short of disappointing. The Pakistani pacers claimed 3 very quick wickets early on to reduce England to 12-3. While the English batsmen were still contemplating Pakistan’s pace attack, Yasir Shah spun a web around them from the other end. The only substantial contribution came from Ollie Pope, who made 62. England were bowled out cheaply for just 219 which meant that Pakistan had a lead of 107 to play with.

The stage was set for Pakistan to mount a monumental total for England to chase down in the 4th innings. England, on the other hand, had to restrict Pakistan to a low score if were to have any chance of winning, and that’s exactly what happened. The hero of Pakistan’s first innings, Shan Masood, was dismissed for a duck by Stuart Broad. Next, it was Chris Woakes who claimed 3 Pakistani wickets in quick succession. With Pakistan reeling at 63-4, Asad Shafiq and Mohammad Rizwan tried to rebuild the innings. However, their efforts were cut short after a brilliant direct-hit from Dom Sibley sent Shafiq packing.

England left Stuart Broad and Chris Woakes out of the first Test of the summer. Since:

Although injured, it was Ben Stokes yet again who provided a vital breakthrough for England by dismissing Rizwan. Now it was up to the Pakistani bowlers to give themselves a good score to defend. With Pakistan 7 down for just 122, Yasir Shah took matters into his own hands and scored 33 valuable runs. Unfortunately for Pakistan, that was all they were going to get from the bowlers as they were bundled out for a 169, setting England a target of 277.

England had their work cut out, 277 to get with a little more than 2 days left. A result seemed certain now. Mohammad Abbas landed the first blow for Pakistan as he trapped Rory Burns in-front in the 11th over. Skipper Joe Root joined Dom Sibley at the crease and the two shared a 64-run stand. Yasir Shah didn’t find any success whilst trying to exploit the ruff outside the leg-stump by going around the wicket as the English batsmen were happy to just kick it away. Shah’s decision to then revert back to bowling over the wicket worked. Just when things were looking good for England, Sibley, who had been so patient up until that point, was caught in the slips after attempting an expansive extra-cover drive.

Pakistan needed a wicket, Yasir Shah gets it!

Dom Sibley goes for a misjudged drive and edges to Asad Shafiq in the slips, England 86/2.

A well set Joe Root who was batting on 42 soon followed after edging one off Naseem Shah’s bowling to first slip. England would have still fancied their chances and would have put their trust on the Stokes-Pope duo, who were then at the crease. However, it was extra bounce from a tired and uneven Day-4 surface that led to the downfall of both batsmen. It Stokes first who got an absolute ripper from Yasir Shah that bounced uncomfortably high. The ball just kissed Stokes’ glove on its way to the keeper and while the on-field decision was not-out, Pakistan’s referral confirmed the nick and Stokes was on his way.

It was Ollie Pope next who got an absolutely unplayable delivery from Shaheen Afridi. The ball pinged off the surface from a good length and caught Pope’s glove only to balloon up into the air for Shadab Khan to complete an easy catch. England were 117-5 still needing a 160 for victory. Chris Woakes joined Jos Buttler at the crease and all of England’s hopes rested on their shoulders as they were the last recognized batting pair. Buttler was in desperate need of some runs and Woakes had not done anything convincing with the bat in hand of late. But the two got to work and slowly chipped away at the target.

Buttler and Woakes were busy at the crease and never let the pressure mount on them. They kept the scoreboard ticking and the strike rotating. They played positively and took the odd calculated risk. While Yasir Shah bowled tirelessly from one end, creating half chances all the time, the English batsmen batted defiantly. While they got increasingly cautious as they approached the target, they batted with great conviction. Jos Buttler later revealed that he’d feared that this would be his ‘last game’ for England following a string of poor performances.

Jos Buttler's Test Batting Average since the start of 2018:

Yasir Shah finally got his reward as Buttler missed a reverse sweep and was given out LBW, but not before Buttler had made 75 and shared a 139-run stand with Woakes. Victory was in plain sight for England as they needed only 21 more. Stuart Broad was promoted up the order in an attempt to finish off the game quickly and while that’s not what won England the game, they eventually did. It was only fitting that the winning runs came off of Chris Woakes’ bat as his unbeaten 84 was instrumental in helping England successfully complete the 2nd highest 4th-innings run chase at Old Trafford.

Chris Woakes was awarded the ‘Man of the Match’ not just for his match-winning 84 but also for his 5 wickets in the game. He’s proved his worth now not just as a bowler but also as a reliable lower order batsman. He may have very well cemented his place at no.7 in the English batting order. Jos Buttler too will be relieved after his knock of 75 as his place in the side seemed in jeopardy.

Pakistan fought hard in this game and they should definitely be proud of their overall performance. Their only concern would be the way they batted in their 2nd innings. England on the other hand were most certainly behind almost throughout this game and it was some great individual performances that helped them snatch an unlikely victory.

We hope you enjoyed the article ‘Chris Woakes leads England’s remarkable comeback’. Whose performance impressed you the most? Let us know!

Which Bayern Munich team was best?