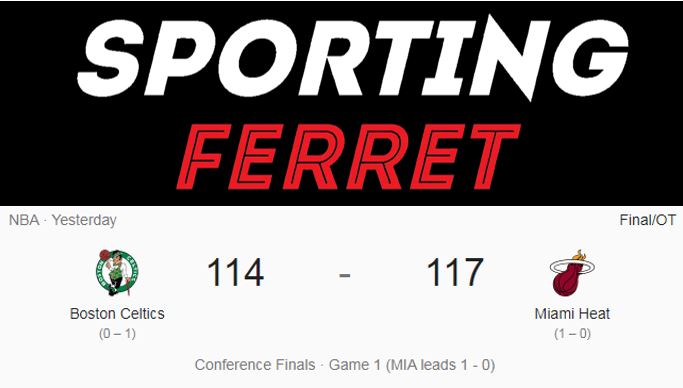 The Eastern Conference Finals kicked off with bang on Tuesday night in Florida. The Miami Heat beat the Boston Celtics 117-114 in overtime after a chaotic end to the game. Both teams look to secure their place in the NBA Finals against either the LA Lakers or Denver Nuggets from the Western Conference.

The Nuggets finished off LA Clippers in game seven on the same night 104-89.  They made NBA history, by being the first team to comeback from 3-1 down, twice in the same playoffs. Jamal Murray dropped 40 points in that game to take them through to the next round.

The Heat have been proving doubters wrong all throughout the playoffs and a spirited team effort puts them one game ahead. After beating number one seed, Milwaukee Bucks in the semis, Jimmy Butler and his team continue to impress.

Meanwhile the Celtics, who sent the Toronto Raptors home after seven games in the last round, also put on an inspired performance. Although they pulled up short on this occasion, they will definitely be ready to battle again in game two on Friday night.

Having played each other three times in the regular season, it was Boston who came out on top winning two out of the three games. The first game of the Eastern Conference finals however, proved to be a different story.

Celtic’s star man, Jayson Tatum led the scoring with 30 points, along with 14 rebounds and five assists. Although putting up good numbers, there were key moments where Boston needed him to step up. Tatum missed a late open three in overtime, shortly followed by being blocked spectacularly by Miami Heat’s Bam Adebayo in the final seconds.

Marcus Smart came out firing in this game with 26 points, including six threes. Point guard Kemba Walker added 19 points to the tally and six assists. While Jaylen Brown scored 17 with five rebounds on top of Brad Wanamaker’s 11 points and six assists.

It proved too little in the end however, with Miami Heat just topping them to win the game by three points. Point guard, Goran Dragic put on a ruthless show, shooting 58% from the field. He ended up scoring 29 points with seven rebounds and four assists. The impressive Jae Crowder and Jimmy Butler added 22 and 20 points respectfully to help with the scoring.

The man of the moment, Bam Adebayo finished with 18 points, grabbing six rebounds and dishing nine assists. While Miami’s Tyler Herro was one assist away from a triple-double, with 12 points, 11 rebounds and nine assists.

Jimmy Butler said post-game: “That sealed the game for us. [Adebayo is] a huge part to why we’re winning. I’ve been saying it all year long and I’ll repeat it again.”

The game went toe to toe right down to the final wire, as both teams put out a monumental defensive display. The first quarter saw Miami get off to a slow start as they quickly went down by 13 in the opening minutes. Boston finished the quarter up by six and with a 26-18 lead going into the second.

A quick turn around gave the Heat the advantage this time round, winning the quarter 29-37. The score was level with 55 a piece going into the half. It stayed tight for most of the third before Boston pushed ahead late in the quarter to gain a 12 point lead.

An eventful fourth period had the Celtics leading for the majority, before Miami clawed their way back into the game. It wasn’t until the final minute where Jimmy Butler hit a clutch three to go up by one with 20 seconds left. Tatum quickly leveled the score by hitting a free throw to take the game into overtime.

With the game jam-packed full of action, overtime left viewers holding onto their seats. Miami kept the lead going into the final minute, before Boston’s Kemba Walker knocked down a brilliant step back jumper with 20 seconds to go. With the ball down the other end, Jimmy Butler scored a crucial and-one layup and converted the free-throw to lead by two.

With eight seconds left, Tatum picked up the ball and drove hard towards the basket to tie the game. As he went up, he found himself matched with a breathtaking block by Bam Adebayo to seal game one in overtime for Miami.

“He made a great play,” Tatum said on the block. “That’s all it is. Can’t do anything about it.”

Bam Adebayo added: “Made a hell of a block. That doesn’t dictate the series, though. We’re only up 1-0, but we got three more to get”.

The Celtic’s will now look to tie the series up going into game two on Friday, as the Heat continue their unstoppable run of form.

Dominic Thiem wins the US Open in comeback performance

Everton’s New Signings: Will They Be A Success Or Failure?