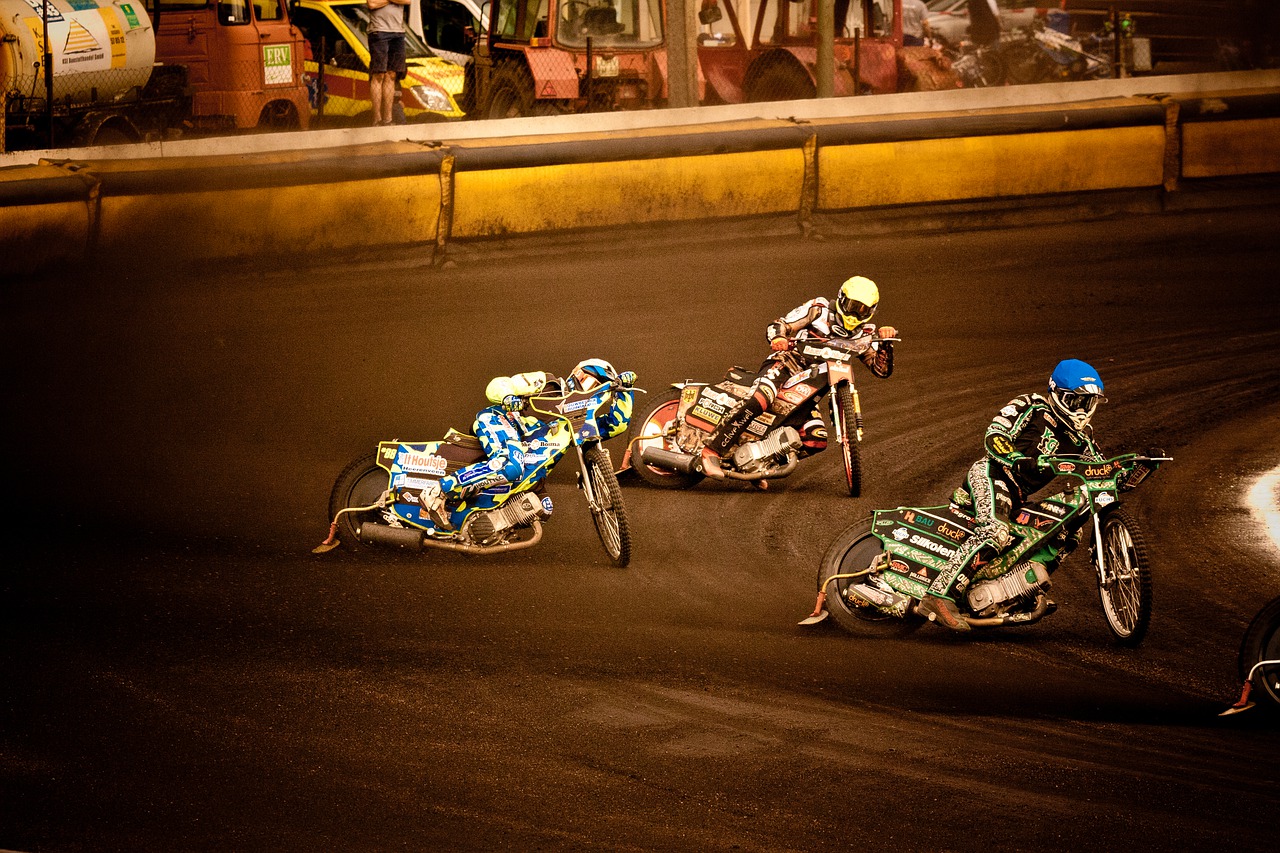 After Czestochowa’s Freddie Lindgren took the lead in the 2020 Grand Prix series, the 2020 Ekstraliga season reached the final week of regular fixtures. When the first tapes rose, four teams were chasing the final two play-off places, for the right to join Unia Leszno and a resurgent Stal Gorzow in the extension to the campaign.
Zielona Gora required just a single point to book their place, while Czestochowa knew a win would be enough to see them in.

Unia Leszno flexed their title-chasing muscles at the Alfred Smoczyk Stadium, doling out an 18-point defeat to Czestochowa, who were relying on ROW Rybnik to spring a shock against Sparta Wroclaw if they were going to qualify for the play-offs.

For all the talent that Czestochowa have on paper in their side, they were simply no match for Unia Leszno getting away from the tapes and this resulted in the hosts taking a pair of 5-1s in the opening three heats, immediately opening the aggregate score gap to 18 points. And even when Piotr Swiderski’s side did make starts, Leszno overpowered them with pace and track craft.

Heat five was a prime example of this as, with Jason Doyle and Rune Holta holding a 5-1 of their own, Australian youngster Jaimon Lidsey (9+3) powered round the outside of both of them to take the lead before clearing off into the distance.

The very next heat did see Leon Madsen (13+1) pull off one of the manoeuvres of the season, however. Having seen Piotr Pawlicki (9+1) and Dominik Kubera (6+1) best him from the tapes, the world number two dived in between the two on the approach to the corner to go from third to first in the blink of an eye. He would repeat the feat in heat 11, brilliantly diving up the inside of Lidsey and Emil Sayfutdinov to earn his side’s sole maximum of the meeting.

Unfortunately though, not enough of Madsen’s teammates provided enough support to him. Only Jason Doyle (12), who found some form at the Grand Prix double-header at the weekend, scored more than five points on the day. Freddie Lindgren (4+1) looked fatigued after his GP exploits; the Swede was excluded from heat 10 for not being ready to race at the end of the two-minute timer – his ignition cut-out cord had come out of the bike. The subsequent 5-1 for the hosts sewed up the bonus point, essentially ending Czestochowa’s play-off ambitions.

For the home side, it was yet another solid team performance with meaningful contributions from top to bottom. Emil Sayfutdinov led the way once again with 12 points and after somewhat of a dip in form, Bartosz Smektala bounced back with three race wins on his way to 11. Whoever earns the right to race Piotr Baron’s side in the play-offs will certainly go into the tie as underdogs.

Despite being a doubt for the meeting, Patryk Dudek held his nerve in heat 15 to ensure that, despite his side taking a heavy defeat at Motor Lublin, Zielona Gora didn’t concede the bonus point that would have seen the hosts take a play-off place.

After an opening maximum for the home side, a rush of blood from junior rider Wiktor Lampart saw carnage befall heat two. On the approach to the third bend for the first time, Lampart couldn’t slow himself in time and completely poleaxed Trofymov and poor Mateusz Tonder had nowhere to go but straight into the back of Lampart, his head slung sickeningly forwards as he was hit by Tonder’s bike.

The re-run saw Tonder on the deck again after a tight entry to the first corner saw him twice nudged by Trofymov; the airfence doing it’s job once again. Fortunately, Tonder was able to walk away from both incidents unharmed. Absolute chaos, and after just two heats.

Having taken an early six-point lead, Motor Lublin were clawed back slowly by Zielona Gora’s middle order and eventually found themselves level in bizarre circumstances.

Grigorij Laguta (11) thought he’d won heat seven, but was excluded for leaving the track while chasing Patryk Dudek for the lead. Replays clearly showed that both of the Russian’s wheels were over the white line on the inside of the track but some would argue that he had little option but to do so due to Patryk Dudek clamping down his attempted overtake. A bold decision from Krzysztof Meyze – one that in hindsight, cost Motor Lublin a play-off place – but ultimately, the right one. 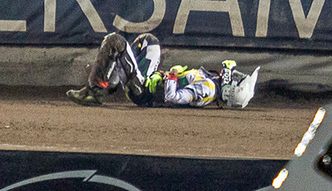 Martin Vaculik was unfortunate to withdraw from the meeting but should be fit for the semi-finals.

It was going to take a gargantuan effort form the home side if they were going to overturn the 14-point deficit they found themselves in with just seven heats remaining, and they were given a lifeline in heat nine, albeit in unpleasant circumstances.

Martin Vaculik had looked off the pace from the start, but in heat nine, the bedlam from earlier in the meeting reared its ugly head again as on the first corner, he was clipped by the back wheel of Grigorij Laguta and took a heavy fall on his way into the airfence. What looked initially innocuous then became a big concern for Gora and Vaculik, like Lampart before him, would take no further part in the meeting.

With the pandemonium at an end, Motor Lublin sought to make the most of one of Gora’s big hitters withdrawing from the meeting. Four straight heat advantages, including back-to-back wins for Jaroslaw Hampel (11), had the home side ten points clear on the night going into the nominated races, but still four down on aggregate. Hampel would step forward yet again in heat 14 to follow in Grigorij Laguta for a maximum that left everything down to the final race.

The result was settled, but the play-offs hinged on the last four laps. Lublin just needed one more heat advantage from Mikkel Michelsen (11+2) and Matej Zagar (10+3) to make it. But just as he did in heat 13, Patryk Dudek (11) made a wonderful start from the inside gate position and showed his class by overcoming huge initial pressure from the home duo and eventually gapping them to take the win.

Having won the reverse fixture 63-27, it was always probable that Dariusz Sledz’ side would take the bonus point so all they needed to do was focus on winning the meeting. But they made hard work of the opening exchanges; Kacper Woryna out-gating all comers in heat one while it took Gleb Chuganov the better part of three laps to hit the front in the juniors’ race, which also ended in a share of the spoils.

Dan Bewley made his return to the Sparta Wroclaw side with the unexplained absence of Maksym Drabik, meaning that for the first time in Poland this year, three brits adorned the track at the same time. Unfortunately, half a lap later, the other two of them were flat on their back. Vaclav Milik got out of shape coming out of the second bend and sent teammate Robert Lambert tumbling who in turn, bundled Tai Woffinden to the floor. Lambert was able to walk away, Woffinden was closer to a hobble but both were fine to take their place in the all-British re-run.

The narrow advantage taken in that race was the only thing to separate the sides in the opening third of the meeting; ROW Rybnik were frequently quicker away from the tapes and were determined not to bow out from the top tier with a whimper. Even in the race wins that Wroclaw took in heats six and seven had to be earned through hard work as Janowski and Woffinden respectively were sluggish enough from the gate that they found themselves in second place halfway through the race. Heat ten even saw Woffinden have to come from the back of the field after drifting off the dirt line in the early stages. The three-time world champion was up to the task though, passing Vaclav Milik to ensure another shared heat maintained their six-point advantage.

Having extended this to eight points, Sparta Wroclaw conceded a shock 5-1 to Kacper Woryna and junior Mateusz Tudziez, reigning them in to just four points but before any nerves could creep in, the Holder/Woffinden pairing returned the favour with a maximum of their own, putting one foot into the play-offs.

The other foot immediately followed but only due to carnage being resumed. Vaclav Milik was again at fault as he lifted on the third bend of the opening lap in heat 14, clipping the back wheel of Mateusz Szczepaniak and the front wheel of Chris Holder, bringing both down in one fell swoop. After some medical attention, all were able to walk away.

The final gloss was added by Fricke and Woffinden, who piled a final 5-1 to the scoreline and leave Rybnik with all three points required to maintain a push for the title. All of the top order contributed for Wroclaw; Max Fricke (12+1) and Chris Holder (9) coming in with their best returns of the season, while despite not being at his best, Maciej Janowski came in with 10 of his own, all in support of the impressive Tai Woffinden, who topped with 13+2.
ROW Rybnik are relegated with a final spirited effort, in which Kacper Woryna was the leading light; Mateusz Szczepaniak (+2) and Robert Lambert coming in with eight points apiece. League One beckons, but they can certainly take heart from this final hurrah.

We hope you enjoyed this article ‘Ekstraliga Round-up (Week 14): Play-Offs Await’. Which of the four teams through to the play-offs are you supporting? Let us know!

Huge crash at Tuscan Grand Prix – Was Bottas to blame?