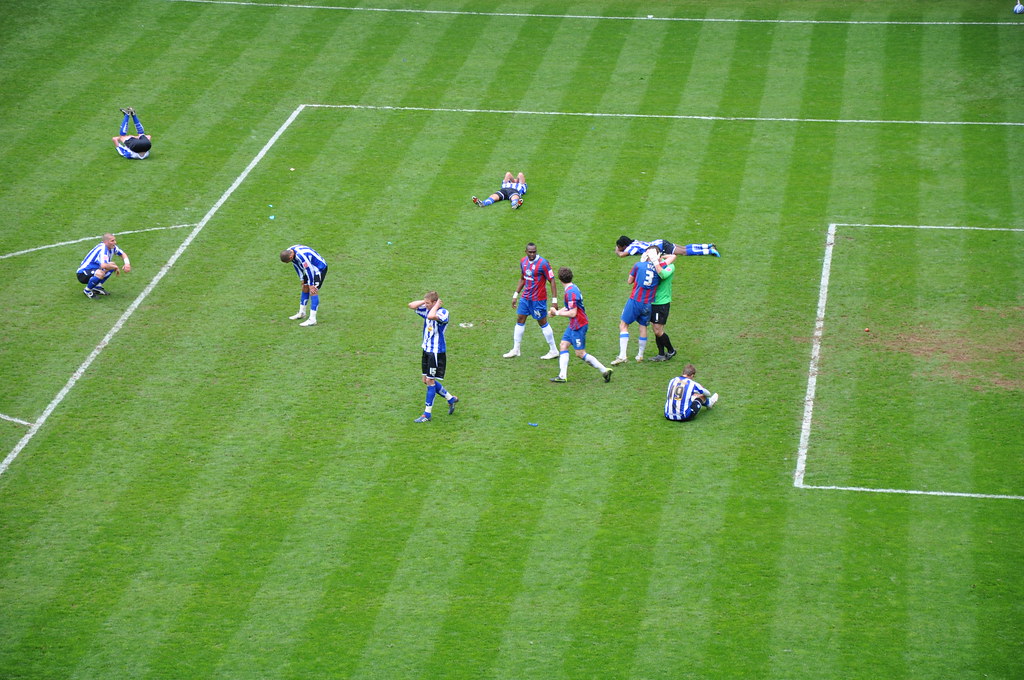 Who will survive the EFL Championship relegation race?

With games coming in thick and fast, there is barely enough time to reflect upon the chaotic end to this Championship campaign. It appears that with four games to go, everything is to play for and only a handful of teams fully know their fate. With promotion to the Premier League occupying the minds of the top 10, it is the relegation battle that is looking increasingly congested.

Ever since the season resumed, it has been evident that those threatened by relegation, have raised their game, resulting in some very impressive but surprising results. This inspired resumption to Championship football by these so called ‘lesser clubs’ has placed high importance on many of the remaining games, with 8 clubs in danger of the drop.

Devastating circumstances at Wigan have resulted in a 12-point deduction, which will come into effect at the end of the season. The Latics have enjoyed an incredible 2020 and have picked up 33 points in the process, so the financial troubles occurring at the club, have really dampened an otherwise brilliant calendar year. The initial 12-point deduction means Wigan will be 4 points from safety but with the ongoing troubles, this deduction could rise up to 15 points.

If any relegation threatened club are playing well enough to stay up, it is Wigan, but unfortunately their fate is unlikely to be decided on the pitch. The Latics face 3 fellow relegation threatened teams in their coming games, before promotion-chasing Fulham visit the DW on the last game of the season. It will be a tough ask for Paul Cook’s men but a challenge that they will undoubtedly fight until the death.

The EFL has been urged to suspend Wigan's points deduction until the events leading up to the club entering administration have been investigated further.

A 2-0 victory at Millwall secured a vital 3 points for The Boro on Wednesday afternoon, in a result that leaves Middlesbrough as the most comfortable team in this fight for survival. The Teesside-based club resumed the season disappointingly, losing 3-0 at home to Swansea, proving to be Jonathan Woodgate’s final game in charge.

The swift appointment of Neil Warnock demonstrated their intent to grind out results and stay up at all costs. Warnock, a man who knows a thing or two about steering clear of relegation in the Championship, has won 2 and lost 2 in his four games in charge and his experience should be enough to guide The Boro to safety.

Neil Warnock cycling home in Middlesbrough is the content everyone deserves to see. pic.twitter.com/FpbvZLjwRw

As a frustrating campaign draws to a close, Huddersfield’s Championship status is still yet to be determined. The Terriers started the season dreadfully, gaining a single point from their opening 8 games, leading to the sacking of Jan Siewert. A surprising appointment in the form of Danny Cowley took over proceedings in September and have managed to turn somewhat of a corner. Since then, Huddersfield have averaged 1.28 points per game, a statistic which would have left the Yorkshire club in 13th.

Huddersfield looked in real danger, after suffering two defeats in the first two games back from lockdown. A restart that angered the Huddersfield faithful, who indicated that there was no desire in the squad. Their previous 3 results appear to have eradicated any fear surrounding their performances and are beginning to edge further from the drop. The Terriers find themselves in significant danger following a 2-0 defeat to fellow strugglers Luton.

A late Ethan Pinnock winner for Brentford sunk a well-organised Charlton side on Tuesday evening, in a result that leaves the London club on 46 points. It all started so brightly for The Addicks, who picked up 14 points from a possible 18 at the start of the season, a run that took them to 2nd place. Since then, it has not looked so good for Charlton, with a terrible 3-month spell, seeing The Addicks win only a single game in 17.

Like their start of the season, Charlton kicked off project restart very well with 1-0 victories against both Hull and QPR but have now only picked up a point in 3 games. Worryingly for Charlton fans, they are struggling to find the back of the net, as they have only managed 3 goals in their last 8 games. Fans will be urging their team to get the job done as soon as possible, with Leeds away as their final fixture.

🏆 @jpearce05 is the @SkyBetChamp Player of the Month for June!

Similar to Huddersfield, Stoke began the season terribly, with now Luton Town manager Nathan Jones in charge. Not only were Stoke bottom after 15 games but they had to wait until October to record their first victory. The board deemed the start unacceptable and sacked Jones, appointing former Northern Ireland manager Michael O’Neill a week later. O’Neill has done a terrific job since arriving in November and Stoke have averaged 1.46 points per game under O’Neill’s influence, which if he had been there at the start of the season, would have seen the Potters in 8th.

Now, O’Neill’s men find themselves in 20th and their 4-0 thrashing of Barnsley earned a first win since the season resumed. The road ahead is not easy though, with games against Brentford and Nottingham Forest still to come, following a demoralising 5-0 defeat to Leeds.

They weren’t always liked, but at least Stoke City used to stand for something. Now they stand for nothing more than a warning of how quickly a football club can unravel.

On New Year’s Day, Hull were absolutely flying and were sitting 8th in the league, only a point behind Millwall, in the play-offs. If you would have told their fans that in 16 games time, they would be in the relegation zone after picking up just 6 points, they would have laughed in your face. It really has been a miserable few months for the club, who now face the challenge of staying up when 16 games ago, they were fancying their chances for promotion.

The inability to replace Bowen and Grosicki has severely damaged Hull’s season as they went into the break suffering 5 defeats in a row. Bowen and Grosicki have contributed to 60% of their goals this season and they both left in January, demonstrating the impact they had going forward. Since the season has resumed Hull earned their first victory in over 7 months in a 2-1 win at home to Middlesbrough. Two further defeats since then has left The Tigers in a vulnerable position going into the last few games. At this point in time, all of their remaining opponents have something to play for, which only makes the task of surviving much more difficult.

The Championship table since Boxing Day 🤔

Look at how many points Hull and Wednesday are on 😳#SWFC #HCAFC pic.twitter.com/jZHwGNlJp4

Luton are currently second bottom of the league on 41 points, but as we have already seen, one win can do wonders. It has been a disappointing campaign for the Hatters. Having previously won League 1 it was always going to be a difficult season, but Luton have not covered themselves in glory this season, conceding and losing more games than any other team in the Championship. Graeme Jones was appointed at the start of the season but became the first manager in England to leave during lockdown, in what turned out to be financially motivated. As one Jones left, another entered and Nathan Jones was controversially brought back.

Luton enjoyed their return back to football after the break, gaining 5 points in 3 games in a tricky run that included a trip to Leeds. Just as The Hatters felt like they were putting a bit of form together, Reading visited Kenilworth Road and hit the Bedfordshire-based club for 5 without reply. On paper, Luton have one of the more favourable run-ins with Blackburn being the only promotion chasing side in sight. However, with a big relegation fight against Hull to come, The Hatters will have to be at their very best to survive.

📝REPORT | Goals from Sonny Bradley and Elliot Lee give the Hatters a vital win on the road against Huddersfield Town 👇#COYHhttps://t.co/oi7CTtWod0

The Tykes are another victim of suffering an awful start, as they picked up 9 points from a possible 54. On the 8th October, Daniel Stendel was sacked after 10 league games without a win. However, Barnsley took their time hiring a new manager, with the under 18’s head coach, Adam Murray taking charge for a period of time. After a further 5 games without a win, The Tykes appointed “Exciting Austrian” Gerhard Struber. Since his arrival Barnsley have managed to gain an average of 1.27 points per game, form that would see his team in 13th place, if he had started the season.

Barnsley picked up 7 points in their first 3 games but have since lost their momentum with a disappointing, 4-0 loss at Stoke, followed by a 1-1 draw at bottom of the league Luton. The Tykes have by far the toughest run in, starting with Wigan at home on Saturday, who have picked up more points in the last 15 games than any other team. Their remaining 3 games all come against promotion chasing sides in Leeds, Nottingham Forest and Brentford. It will be a big ask for Barnsley to stay up at this point but you would be crazy to rule them out.

The bottom of the Championship is absolute chaos. So many struggling teams who can’t seem to get near 50 points. Barnsley will be right back in amongst it with three big points tomorrow but Wigan are one of the form teams in England in 2020 and only conceded in 1 of last 9 games

We hope you enjoyed this article ‘Championship Relegation Race: The Fight for Survival’. Who do you think will be relegated from the Championship this season? Let us know!