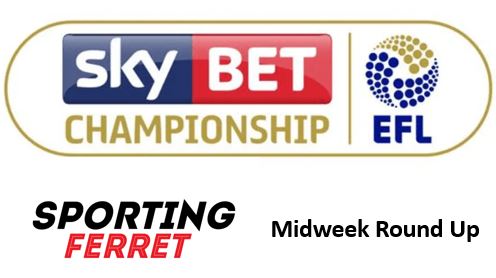 EFL Championship Midweek Round Up

In a week that has seen Wigan inadvertently become apart of the Championship relegation fight, by falling into administration they face the possibility of a 12 point deduction. A deduction that would see them fall into the relegation places as it stands. Elsewhere things remain tight at the top and the race for the play-offs is anybody’s guess.

The action got underway on Tuesday night and it was Brentford, yet again, who made the most headway on Tuesday, they continued their fine form since the resumption with an emphatic 3-0 win away at Reading. Goals from Bryan Mbeumo, Joshua Da Silva and Joel Valencia sinking the Royals and keeping the Bees in third chasing automatic promotion.

The Bees take the points from Madejski Stadium as Mbeumo, Dasilva and Valencia all get on the scoresheet.#REAvBRE | 0-3 pic.twitter.com/qKIpALmD8l

The biggest surprise of the night was Leeds’ inability to put Luton Town to the sword. Table toppers Leeds dropped more points when they could only manage a draw at home against bottom of the table, and seemingly doomed, Luton. Harry Cornick gave the visitors a surprise lead before experienced midfielder Stuart Dallas levelled. Two dropped points for Leeds who now hold a six point advantage over Brentford in third.

West Brom capitalised on Leeds’ failure on Wednesday, with a comprehensive victory away at Sheffield Wednesday. A Charlie Austin penalty and a brace from Matheus Pereira cutting the gap to just one point between the top two.

Scott Parker’s Fulham stabilised their play off hopes with a win at out of form QPR. They had to come from behind after on-loan forward Jordan Hugill opened the scoring in the first minute, however, strikes from Harry Arter and Cyrus Christie kept the Cottagers in fifth. EFL Championship: The Winners and Losers During Lockdown

If the Wigan players knew about their impending administration they certainly didn’t show it. The did their now survival chances the world of good when they beat Stoke 3-0 at the DW Stadium. Two second half Kal Naismith goals doing the damage after Stoke keeper’ Jack Butland had converted into his own net.

Oakwell saw its own Yorkshire shock this week when a seemingly doomed Barnsley defeated play off hunters Blackburn. Conor Chaplin opened the scoring for the Yorkshire side before Jacob Brown sealed what could be a crucial three points. To top off a poor night the visitors had Ben Brereton sent off on the 74th minute.

The Cowley brothers Huddersfield Town side picked up an invaluable win on the road as they put three past an out of sorts Birmingham. A first half penalty from Karlan Ahearne-Grant started the night off for the Town. Second half goals from Fraizer Campbell and Elias Kachunga ensuring the victory that moved Huddersfield away from the drop zone.

On Thursday night Neil Warnock, who has enjoyed a decent start as Middlesbrough boss, took his side to fellow strugglers Hull City. After Britt Assombalonga put the visitors ahead it looked as though Warnock’s run was set to continue. However, a wonder free kick from Liverpool loanie Herbie Kane and a 91st minute goal from Mallik Wilks stole the three points for Hull.

Around the other midweek Championship results:

Millwall 1-1 Swansea City. A draw was of no use to either side, both with aspirations of making a late charge for the play offs. Goals from Mason Bennett and an own goal from Bartosz Bialkowski cancelling each other out.

Nottingham Forest 1-0 Bristol City. Portuguese midfielder Tiago Silva with the only goal of the game, keeping Forest in the play-offs and City mid table. Experienced defender Ashley Williams was sent off for the away side.

The Championship action started again last night when a Jake Coopers goal gave Millwall all three points away at Charlton, kicking off another full weekend of fixtures.

What comes next for Fnatic?