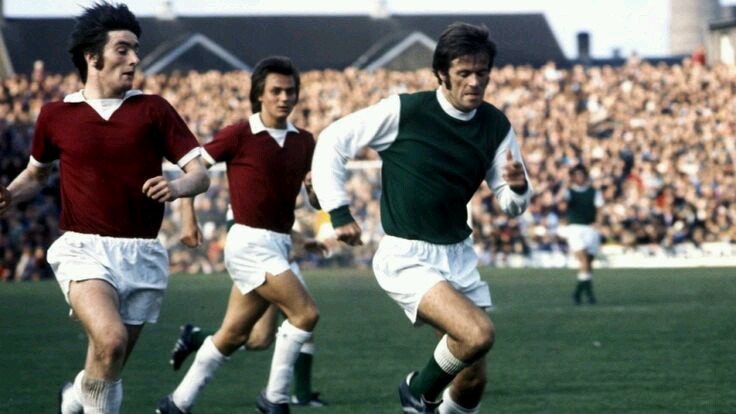 It All Goes Back To Pat

With supporter-activity a distant dream, thoughts turn to where it all began…

Entry secured, he negotiates the daunting concrete stairway. Enveloped by an emporium of colour (in both form and language) his live sporting debut dawns.

Attention focuses on the Persil-white number 4 emblazoned on the back of the emerald-green uniform adorned by his favourite player. Captain Pat Stanton is in position. Time has erased memory, save for a Stanton hat-trick in a 5-1 home-win.

This early seventies Hibs side were affectionately known as “Turnbull’s Tornadoes”- a reference to their astute manager Eddie Turnbull. Their attractive brand of attacking football received numerous plaudits, and consistently challenged traditional West of Scotland hegemony.

During his tenure Hibernian were rewarded with a trophy or two, and supporters fondly recall a 7-0 lesson inflicted on city rivals Hearts, in a New Year’s Day fixture in season 1972/73.

This young fan was fortunate to witness Pat on a number of occasions during an illustrious career. His grace and composure (on and off the field) shone brighter than most. He represented Scotland on sixteen occasions, and in season 1975/76 his quality helped secure a League and Cup double under the tutelage of long-time admirer Jock Stein at Celtic. For the many however, he remains Pat of the Hibees.

We hope you enjoyed the article ‘A Tribute To Pat Stanton’s Hibernian Dream Team.’ Is Pat Stanton the greatest Hibs players of All Time? Let us know!