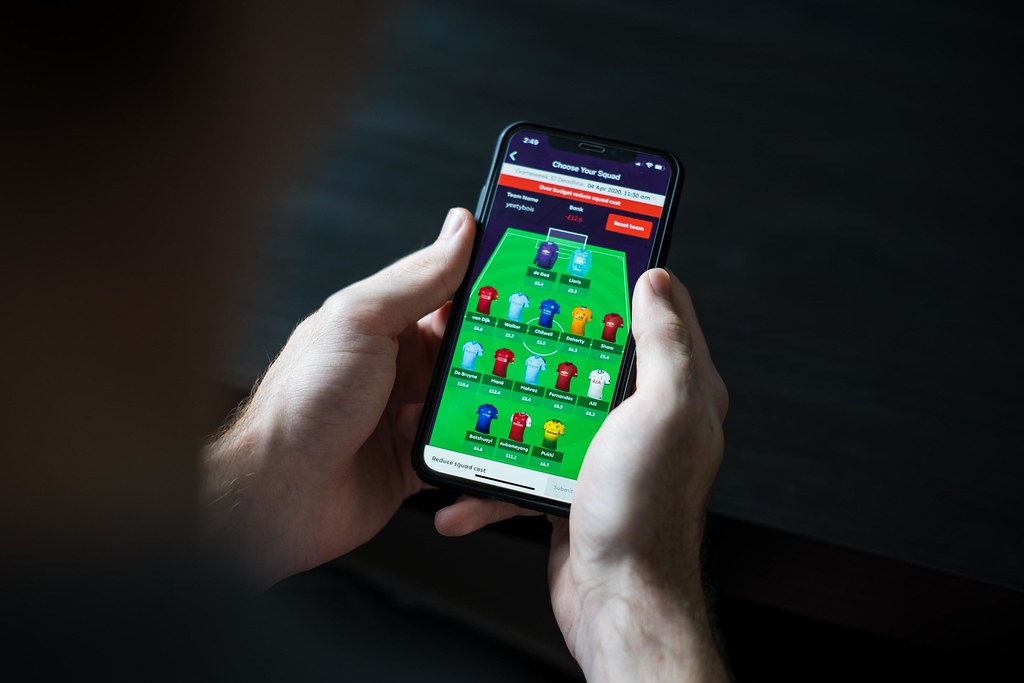 Every year Fantasy Football grows in popularity. This year, to help you select your squad for the upcoming season we’ve put together a Fantasy Football season preview. We’re using the Premier League’s official Fantasy Football competition, so if you’re unfamiliar with how to play fantasy football, check out their website for a full set of rules and how to get started.

Each squad consists of 2 Goalkeepers, 5 Defenders, 5 Midfielders and 3 Forwards. Some managers like to spend the majority of their money on more expensive attacking players and have a more budget defence. Will you spend big on a stronger starting XI and have a weak bench, or will you opt for a more balanced squad of more equally priced players? Are you going to buy one premium goalkeeper and buy a budget back up who never plays? £100 million doesn’t allow you to fill a team with 15 superstars, so you will need to consider how you want to play the game.

We’re going to take a look at some players that you should consider in each  of the four positions. We’ll also be giving you some budget options and a couple of possible hidden gems. Every season there are a couple of surprise players, last season it was Leeds United’s Stuart Dallas and the year before it was Sheffield United’s John Lundstram. Hopefully you can use our advice and make a strong start to next season’s competition.

This season's surprise package will be ___________#FPL pic.twitter.com/GrF4PsCycB

Last season, Aston Villa’s Emi Martinez (£5.5m) was the highest scoring goalie, with Manchester City’s Ederson (£6m) close behind. Edouard Mendy (£6m) of Chelsea also had a strong showing, especially as he only played half of a season. A few cheaper options who performed well were, Southampton’s Alex McCarthy (£4.5m) and Crystal Palace’s Vicente Guaita (£4.5m). If you want to consider some solid mid-priced ‘keepers then Kasper Schmeichel (£5m) of Leicester City or Leeds United’s Illan Meslier (£5m) would be sound investments.

Despite Liverpool underperforming last season, both Trent Alexander-Arnold (£7.5m) and Andy Robertson (£7m) were at the top of the point scoring charts. After returning from a season shortened by a knee injury, will Virgil van Dijk (£6.5m) be worth a punt? Chelsea’s defence was full of notable performers, with Cesar Azpilicueta (£6m), Ben Chilwell (£6m) and Reece James (£5.5m) all scoring heavily by combining clean sheets with goal assists. West Ham United’s Aaron Cresswell (£5.5m) was a surprising performer, as were the majority of Aston Villa’s defenders, all representing good value for money. Ruben Dias (£6m) and Joao Cancelo (£6m) were Manchester City’s top scoring defenders. Choosing any of Pep Guardiola’s players can prove frustrating, as he makes unpredictable selections, Fantasy managers call it playing “Pep-Roulette.”

More budget-friendly options at the back could be Wolves’ Conor Coady (£4.5m), Tariq Lamptey (Brighton’s – £4.5m), Tyrick Mitchell (Crystal Palace – £4.5m) or Luke Ayling (Leeds United – £4.5m). Investing in defenders from the newly promoted teams could be treacherous, as we don’t know how well they will adjust to life in the top flight. Brentford’s Rico Henry (£4.5m) has potential, as do Norwich City’s Max Aarons (£4.5m) and Watford’s Francisco Sierralta (£4.5m).

Which defenders slot straight into your 2021/22 #FPL side?

Choosing a high scoring set of midfielders is vital if you plan on having a successful season. Big-name midfielders are going to cost big-time money, but they don’t always live up to their price tag! No Fantasy Football season preview would be complete without mentioning the likes of Bruno Fernandes (Manchester United – £12m), Mo Salah (Liverpool – £12.5m) or Heung Min Son (Tottenham – £10m), who were outstanding last season. Liverpool’s Sadio Mane (£12m) and Marcus Rashford (Manchester United – £9.5m) round out last season’s top 5 highest-scoring midfielders.

Higher priced midfield assets to consider are Manchester City’s Kevin De Bruyne (£12m) and Raheem Sterling (£11m), Chelsea’s Kai Havertz (£8.5m) and Mason Mount (Manchester City – £7.5m) , Jack Grealish (Aston Villa – £8m). A special mention should go to Diogo Jota (Liverpool – £7.5m) who made an eye-catching start to his Anfield-career after joining from Wolves in January. He could be score a substantial number of goals, as well as making valuable assists, should Jurgen Klopp decide to make Jota a regular starter.

Some mid-priced selections that could provide good points returns can be found in the Leeds United midfield, with Raphinha (£6.5m), Jack Harrison (£6m) and Stuart Dallas (£5.5m). Arsenal’s Bukayo Saka (£6.5m) and Emile Smith Rowe (£5.5m) look to build on breakout seasons last year. James Maddison (Leicester City – £7m), James Ward-Prowse (Southampton – £6.5m) and Emi Buendia (Aston Villa – £6.5m) are all players that can both create and score goals from midfield, with them all being integral parts of their respective teams.

If you are looking for a potential bargain or two, then maybe look at Brentford’s Matias Jenson (£5m), Declan Rice (West Ham United – £5m), Yves Bissouma (Brighton – £4.5m), along with the Norwich City duo of Onel Hernandez (£5m) or Billy Gilmour (£4.5m).

So many premium assets to choose from, only so much money 😩

Unlike choosing your defenders and midfielders, you can only select three forwards, so you should choose wisely. Multiple Golden Boot winner, Harry Kane (Tottenham – £12.5m), is rightfully the most expensive forward available and will be chosen by the majority of managers. Last season, Kane scored almost 50 more points than second-place Patrick Bamford (Leeds United – £8m) . Even though Jamie Vardy (Leicester City – £10.5m) endured one of his more inconsistent seasons, he still managed to score the third highest amount of points. Aston Villa’s Ollie Watkins (£7.5m) had an amazing first season in the Premier League, that no one could have predicted. He narrowly outscored Dominic Calvert-Lewin (Everton – £8m) who completes last season’s top 5 scoring forwards.

Other high-priced forwards worth considering are Roberto Firmino (Liverpool – £9m), Danny Ings (Southampton – £8m), Gabriel Jesus (Manchester City – £8.5m) and Kelechi Iheanacho (Leicester City – £7.5m). You might want to gamble on either of Arsenal forwards Pierre-Emerick Aubameyang (£10m) or Alexandre Lacazette (£8.5m) to have more successful seasons. Perhaps Wolves’ Raul Jimenez (£7.5m) might make a goal-scoring return to action, after missing the majority of last season with a fractured skull.

💰 Which of these pricey forwards will be scoring big #FPL points this season? pic.twitter.com/GbM1EBFTQB

In order to have a successful season you need to:

We hope you enjoyed the article ‘Premiership Fantasy Football Season Preview.’ Did we miss any hidden gems? Who are you going to select in your team? Let us know your thoughts!

(3042)
£6.70
Aircell technology is fully breathable, keeping you cooler and dryer Lightweight foam backing allows air to circulate, so the heat of the battle can stay on the pitch No ankle sock makes this a lighter guard option Mitre guards are CE and SATRA teste... read more
(as of 16th September 2021 - More infoProduct prices and availability are accurate as of the date/time indicated and are subject to change. Any price and availability information displayed on [relevant Amazon Site(s), as applicable] at the time of purchase will apply to the purchase of this product.)

(1630)
£5.99
The Original Classic CE Approved Boil and Bite Latex & BPA Free Game Guard Gum shields. Easy to fit and fit for purpose. - Trusted and Approved by 100's of Schools and Clubs. If you or your child are taking part in contact sports, then a mouthguard s... read more
(as of 16th September 2021 - More infoProduct prices and availability are accurate as of the date/time indicated and are subject to change. Any price and availability information displayed on [relevant Amazon Site(s), as applicable] at the time of purchase will apply to the purchase of this product.)

(1524)
£2.99
Twist N Sip lid provides a hygienic way to drink Contempory design with a slim and easy to grip body Leak proof water bottle for the office, school, sport and on the go Dishwasher safe (top rack), microwave (without lid), fridge and freezer safe Desi... read more
(as of 16th September 2021 - More infoProduct prices and availability are accurate as of the date/time indicated and are subject to change. Any price and availability information displayed on [relevant Amazon Site(s), as applicable] at the time of purchase will apply to the purchase of this product.)

(29563)
£69.99
Battery Life: Up to 10 days Compatibility: Compatible with iOS 12.2 or higher & Android OS 7.0 or higher Free Fitbit Premium Trial: Your Inspire 2 tracker unlocks a free 1-year Fitbit Premium trial complete with step-by-step fitness & nutrition progr... read more
(as of 16th September 2021 - More infoProduct prices and availability are accurate as of the date/time indicated and are subject to change. Any price and availability information displayed on [relevant Amazon Site(s), as applicable] at the time of purchase will apply to the purchase of this product.)

(7213)
£10.99
MOTIVATION - Getting your daily allowance of water can be difficult. Which is why we designed our Hydrate bottle to come with time markings helping you track your water intake and motivating you to hit your daily targets. DESIGN - Our leak proof wate... read more
(as of 16th September 2021 - More infoProduct prices and availability are accurate as of the date/time indicated and are subject to change. Any price and availability information displayed on [relevant Amazon Site(s), as applicable] at the time of purchase will apply to the purchase of this product.)

(10191)
£10.99 (as of 16th September 2021 - More infoProduct prices and availability are accurate as of the date/time indicated and are subject to change. Any price and availability information displayed on [relevant Amazon Site(s), as applicable] at the time of purchase will apply to the purchase of this product.)
Related Topics:#arsenal #AstonVilla #Brighton #Burnley #Chelsea # Crystal Palace #everton #Leeds#FPL#Leicester #mancity #manutd #newcastle #sheffieldunited #southampton #tottenham #westbrom #westham #Wolves #PremierLeague#ManchesterUnited#PremierLeagueBrentfordFantasy Premier LeagueLiverpool F.CManchester CityNorwich CityPremier LeagueWatford
Up Next

Future Stars Of The Premier League

Predicting Next Season’s PFA Player Of The Year