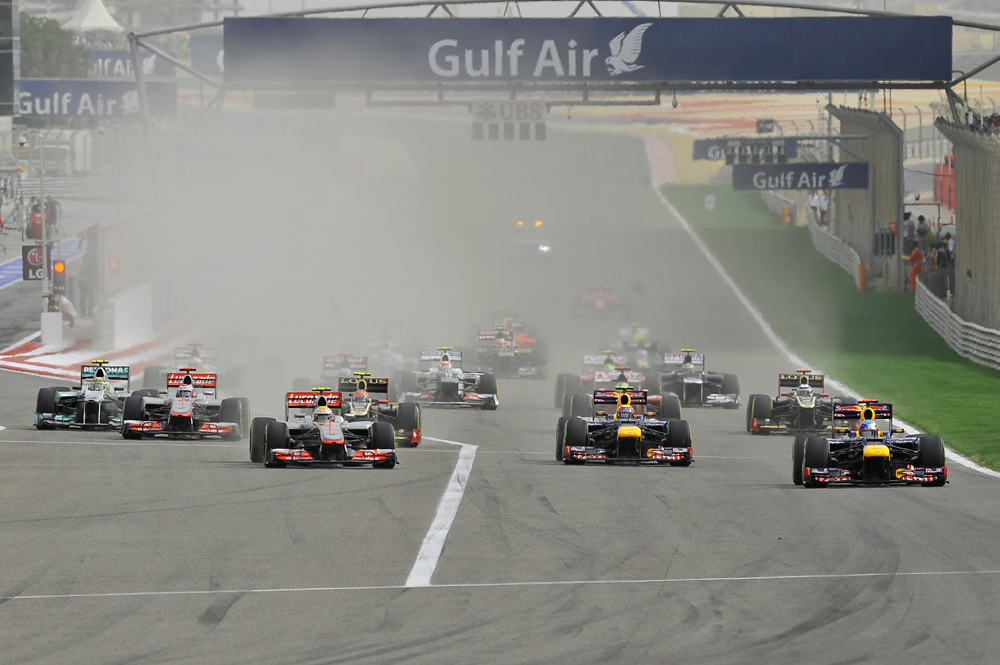 When the lights went out, Hamilton got a lightning getaway while his teammate, Valtteri Bottas was quickly swallowed by both Red Bulls behind him and Sergio Perez in the Racing Point.

However, the race was quickly suspended after Romain Grosjean, Haas, went head first into the barrier, at high speed, on the second straight – engulfing the car in flames as it split into two pieces.

Luckily, Grosjean was still conscious to get out of the fire within 18 seconds – despite also being buried onto the barrier with the front half of his VF-20.

Duration: One hour and 21 minutes

While the cars were sat in the pit lane during the red flag Pierre Gasly, Alpha Tauri, and Sebastian Vettel, Ferrari, swapped their medium tyres for the hard compounds.

Lap nine marked the first lap in the Grand Prix of unhindered Formula One racing after Lance Stroll was flipped over on the race restart following the red flag – which brought out the safety car.

Lance Stroll is upside down, he is out of the car and ok.

Carlos Sainz, McLaren, overtook Leclerc at turn one as he chased down the Monegasque at the beginning of the 12th lap. However the Ferrari driver attempted to overtake the Spaniard down into turn four to no avail – but nearly lost control on the exit of the corner, similar to that of Vettel in 2019.

Daniil Kvyat received a 10 second stop on the 13th lap as it was concluded by race control that the Russian caused a collision earlier on in the race.

To cover from the undercut, Hamilton made a pit stop retaining his medium tyres to opt for a two-stop strategy on lap 19 – Max Verstappen pitted the following lap.

As the race neared it’s half-way mark, Sainz finally came into the pits to ditch his soft compound tyres for the medium set.

Lando Norris, McLaren, stormed down the throat of Bottas on lap 25 with the help of DRS (Drag Reduction System) into turn one – but the trailing Mercedes pitted the lap after as he changed his hards back to another set of mediums.

On lap 35, Verstappen ventured into the pits as he looked to threaten Hamilton’s chances of a Bahrain victory. However, it was a unusually slower pit stop as the Dutch driver was stationary for 5.1 seconds.

Mercedes responded as they brought Hamilton in the following lap – both drivers swapped their mediums for the hard compound.

With six laps to go, Hamilton and Verstappen seemed to be in a world of their own as the newly crowned seven-time world champion led by 21 seconds and the Dutch driver was 14 seconds ahead of Perez.

Perez seemed to have power unit issues as his car steadily started to smoke, until the third DRS zone between turns 10 and 11 where the Mexican driver finally stopped his RP20 as it caught fire.

Due to the late appearance of the safety car, the race ended behind the Mercedes AMG GTR with Hamilton leading the pack to the chequered flag as Bernd Mayländer veered off into the pit lane.

We hope you enjoyed this article ‘Bahrain Grand Prix: Lewis Hamilton wins after Romain Grosjean crash’. Who do you think will win when the drivers return to Bahrain next weekend? Let us know!