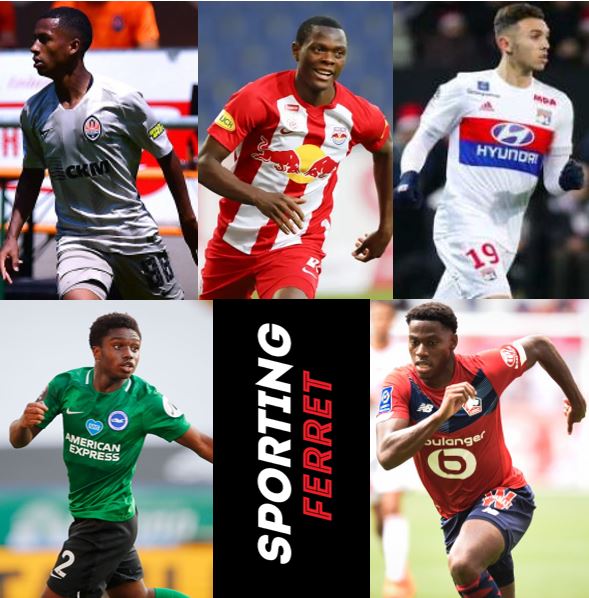 Who will be the next set of wonderkids to take Europe by storm?

Every year, in the world of football, we see a whole host of new and exciting young talent emerge under the label of ‘wonderkids’. A group of players who have an endless amount of potential. Throughout the years, many have failed to live up to that potential, often being forgotten about in years to come and replaced by the next generation. However plenty of former wonderkids have managed to exceed and go on to have sensational careers.

Whilst clubs such as Ajax and Benfica are known for their youth developments, the wonderkids in this list have taken unique routes to get to where they are now. Facing difficult decisions and obstacles where they are now breaking into their current clubs first teams.

Previous names that could had been on this list before achieving great success in the sport include Alphonso Davis, Jadon Sancho, Bernardo Silva, Kylian Mbappe and Romelu Lukaku.

Whilst the term ‘wonderkids’ expands to many young talents throughout the world, I have picked out a few of names for you to keep an eye out for this season.

#Benfica (£170m) and #Ajax (£165m) were among the sides to make the most in player sales this summer.#TransferDeadLineDay pic.twitter.com/pao0TbCdYD

One of the most exciting players to watch out for this season is the Lille attacking forward: Jonathan David. The New York born, Canadian international recently made a 30 million euro move from Belgian side Gent, signing on a 5 year contract. In his time in Belgium, David scored 30 goals in 60 appearances, a record that any striker would be happy with.

Despite not being able to score in his opening 5 games for the club, Lille have high expectations for the 20 year old who has come in as a direct replacement for last season’s top goal scorer Victor Osimhen. David had a whole host of clubs to choose from, but the young and exciting lineup that Lille have to offer was too good to turn down.

Very excited to start this new chapter with LOSC!

David- who is a versatile forward can play on either wing or as a second striker, which he has been utilised as so far at Lille, behind Burak Yilmaz. Lille operate using a ‘free roaming’ style attack that allow David to switch positions depending on his comfortability throughout the game. A style that will become an exciting one to watch as the young Canadian gets acclimated to the clubs style of play and tougher oppositions. David is surrounded by other promising talents: Jonathan Ikone, Luiz Araujo, Jonathan Bamba, Timothy Weah and Renato Sanchez. A group of players that makes this side one of the most interesting to watch throughout Europe this season.

Given his somewhat underwhelming start to life in Lille, manager Christophe Galtier firmly believes that David will be a success for the club, it will just take time. Defending his newest star, who failed to play a single competitive match since March due to the pandemic. Stating that:

“he needs sessions and, above all, he needs matches. He has this capacity in certain areas of the pitch to turn and make big differences with his acceleration. And then, he is an excellent finisher. Maybe he missed the chance vs Metz because he was precipitating, but he is very efficient in the box, we see it in training.”

It is no doubt that he has moved to a league that is much stronger than his previous experiences. A move that means it will naturally take time for him to adjust. So far this season he has shown promising signs, but given the quality around him in that Lille side, it is with no doubt that he will become a great asset.

Be prepared to see him make a name for himself within the Europa League. Lille are in a group with Celtic, Sparta Prague and AC Milan. A group that the French club will very much so believe they are capable of escaping, with David being at the centre of these plans.

A player that many of us would have learnt a lot about recently. Tariq Lamptey has become a regular starter for Brighton & Hove Albion, having made his move from Chelsea.

Lamptey left the blue side of London for £3 million in January and it has looked to be an absolute steal from Graham Potter. Having signed an explosive, skillful and hardworking full back who has offered a great attacking option for the club. It is with these attributes that have made him a fans favourite already and popular choice in the fantasy football.

Since the return from the pandemic, Lamptey has become a nailed on starter for Brighton. Despite having only played 13 games for the Seagulls, Lamptey was linked with a big money move to Bayern Munich before the end of the transfer window. That is credit to his impressive performances as he continues to showcase his talents in the early stages of this season.

Lamptey joins the long list of talented England right backs, having recently made his Under 21’s debut in a 2-1 win against Austria, Lamptey may well become another option to challenge the likes of Trent, Trippier, Walker and Reece James. Given his start to this season, he may well begin to give Gareth Southgate a headache ahead of next summer’s European Championships.

The young right back is a player whose stock price has risen with every minute he sets on a football pitch. Being a player that is very capable at both ends of the pitch.

The Nice striker who is currently setting Ligue 1 alight. Having bagged a brace on his debut, Amine Gouiri hasn’t wasted time in making a name for himself.

The French striker has recorded 3 goals and 2 assists in 8 games since moving from Lyon for 7 million euros. Despite not being at the top of the pecking order in Lyon, Gouiri realised his own talents and believed he was good enough to start and decided to go ahead with this move to Nice.

Gouiri joins what is another exciting French side with quality young players in the squad. So far, manager Patrick Vieira has utilised him just behind fellow striker Kasper Dolberg in what is a strike partnership you must keep an eye on this season.

👏 Promising young forward Amine Gouiri pulls one back for Nice…

One to watch in the UEL this season? 💫#UEL pic.twitter.com/EO0KQN6q7E

Gouiri made an impression during his first Europa League game this season against German outfit Bayer Leverkusen. A goal that proved his confidence in coming deep to collect the ball before placing it into the far right hand corner with a lovely low-driven shot. It looks as if he has already developed a trademark in styles of goals, having a successful time cutting in onto his right foot and being able to curl his shots into the far corner.

The young French star is a player who is confident running with the ball at defenders with the ability to finish off chances as well. He has shown his ability in playing in various positions, being able to play on the left-wing as well as the striker position or even just behind the striker. His confidence and determination to create and setup chances for himself and his teammates is already being recognised and its paying off as he and Dolberg take set to form a formidable partnership up top for Les Aiglons this season.

Gouiri becomes the third 20 year old to make this list has had nothing short of an impressive start to life in Nice. Already looking to be one of the bargains of the summer for the young striker.

Again, another 20 year old who showed his calmness on the ball with his passing range and his quick feet to shrug off defenders, the young Brazilian sets to make a name for himself in this years UEFA Champions League. Many so far have compared his style of play to that of Casemiro of Real Madrid, suggesting that Antonio may be the man to soon replace his fellow Brazilian for Los Blancos.

Shakhtar have had somewhat of a love story with Brazilian wonderkids in recent years. Names such as Willian, Bernard, Douglas Costa and Fred have all gone through the Ukrainian ranks to eventually join the European elite clubs. Something of a strange but fascinating journey, which has payed off for many before Marcos Antonio.

Despite being only 20 years old, Antonio has had something of a bizarre journey to get to where he is now. Having gone through the ranks at Atletico Paranaense in Brazil, to moving to second tier Portuguese side Estoril, he has seemingly now settled in Donetsk. During this early career, the young Brazilian has been involved in the national teams Under 17s and 20s. Given he has regular feature in the youth setups and his so far cultured performances in the Champions League, it is only a matter of time before he makes his first team international debut.

The only player to break the mould of 20 year olds is the 22 year old Patson Daka. The Zambian centre forward has been making waves throughout Europe for RB Salzburg.

Daka is a player with great acceleration, similar to Gouiri he is comfortable with the ball at his feet. Although his preferred foot is his right, Patson Daka is extremely comfortable being able to find the back of the net with both feet and from headers.

The Zambian has been destined for greatness for many years now, having been awarded as the CAF Youth Player of the Year in 2017. An award that players such as Achraf Hakimi and Victor Osimhen have won in previous years.

A player that can be compared to Jamie Vardy given his pace, intelligence to get beyond the back line and his lethal finishing. In recent transfer windows, he has been linked with Arsenal and Tottenham Hotspur, with another strong season this year he may be very close to making that move away from Salzburg.

The young man has started the season in great form. Having scored 6 goals in 5 games in the Austrian Bundesliga, he scored 2 goals in 3 Champions League Qualifying games as he helped the club reach the group stages of the competition.

The questions about the quality of the Austrian league are evident, however, he will get a good test of his quality by facing up against Atletico Madrid and Bayern Munich in this seasons Champions League.

Other wonderkids to keep an eye out for:

We hope you enjoyed this article on ‘The 5 young wonderkids to watch out for this season across Europe’. Who have I missed out that is going to make a name for themselves this season? Don’t hesitate to let us know!