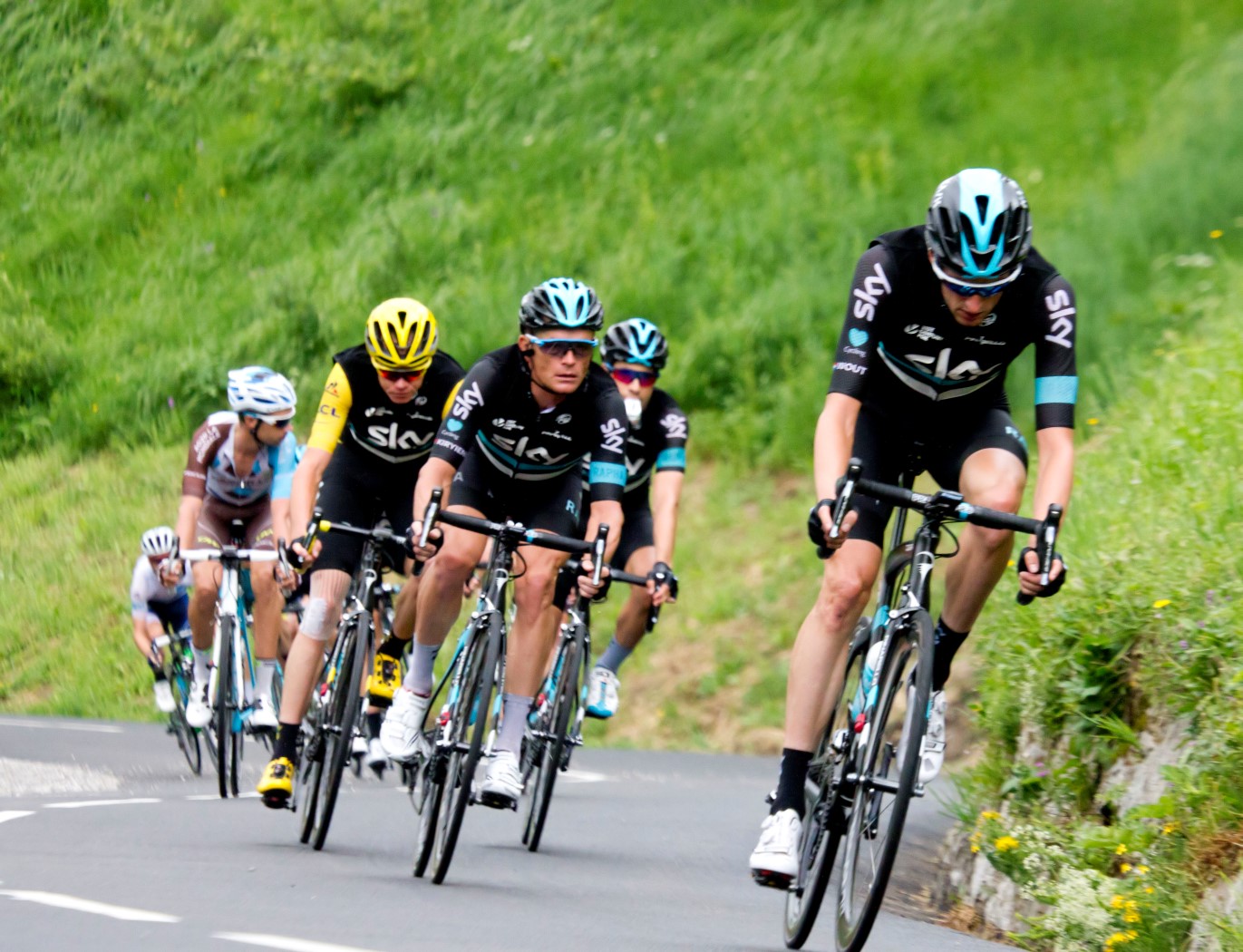 The success story of Team Sky

Over the past decade, competition for the Tour De France yellow jersey has largely been dominated by one team: Team Sky (now known as Team INEOS). The British based outfit have produced the race winner in 7 of the last 8 editions, with only Vincenzo Nibali breaking their stronghold in 2014 after favourite Chris Froome crashed out of the race.

This highly successful period has seen the team nurture a seemingly endless conveyor belt of elite talent, with the 7 victories shared between 4 different riders; Bradley Wiggins (2012), Chris Froome (2013, 15, 16 and 17), Geraint Thomas (2018), and most recently, Egan Bernal (2019).

@GeraintThomas86 poor show it was stolen, however the real trophy is a yellow jersey. No one looks back in history and looks at the trophy, they all look at pictures of winners in Yellow.

In addition to these yellow jerseys, several additional team and individual triumphs have ensured that this cycling dynasty is cemented into the history books. Arguably the best indicator of this success is that Team Sky/INEOS have been able to boast two riders on the podium in Paris on three separate occasions. This dominance was also plain to see in 2015, when, on the way to his second yellow jersey, Froome inadvertently picked up the polka-dot jersey for best climber.

The Kenyan born Brit has also previously balanced Tour De France success with a packed cycling calendar. He has won both the Vuelta a España (2011 and 2017) and the Giro d’Italia (2018), at one point holding all three prestigious Grand Tour winners jerseys simultaneously.

The almost unprecedented longevity of their dominance undoubtedly makes Team Sky one of road cycling’s greatest ever teams. Proving an almost unbeatable machine in recent Tours, they show no signs of easing off in the immediate future, and remain the team to beat.

So how did one team engineer such a monopoly on the yellow jersey? We take a look at the story behind the team that created a cycling dynasty in one of the world’s toughest sporting events.

Turn the clock back to 2010 and Britain had never produced a Tour De France winning rider. The efforts of Tom Simpson, Chris Boardman, Sean Yates and David Millar were the closest any Brit had really got, each wearing yellow for only a handful of days before it changed shoulders.

However, 2010 marked the beginning of a new era for British road cycling. With sponsorship from British Sky Broadcasting, and the support of key figures like Chris Boardman and Dave Brailsford (performance director of British Cycling at the time), Team Sky was formed.

The team was founded with the primary goal of producing the first British winner of the Tour De France. To accomplish this, it was decided that the core of the squad should be comprised of relatively young British riders, supplemented with several established foreign names. The first roster of Sky riders reflected this, including the likes of; Thomas, Froome, Wiggins and Stannard, alongside Simon Gerrans, Edvald Boasson Hagen and Thomas Löfkvist.

However, this blueprint would only be the start. In order to truly change the landscape of British road cycling, the team management recognised the need for a cultural overhaul. They set about this by outlining clear non-negotiable team values, focusing on every detail, no matter how small. This unrivalled attention to detail is widely considered to be the defining feature of Team Sky’s success.

The long list of aforementioned triumphs enjoyed by Team Sky since their inception can be largely attributed to what is known as the ‘aggregation of marginal gains‘.

This philosophy was implemented by Dave Brailsford following his appointment as general manager of the team. In his own words, the basis of the theory is that “if you break down everything you could think of, that goes into riding a bike, and then improve it by 1%, you will get a significant increase when you put them all together. They’re tiny things, but if you clump them together it can be the difference between winning and losing.”

This approach requires that every detail and process that occurs within the team is questioned and analysed. This ensures that everything is done with purpose and for a reason.

In order to reach and remain at the top of the sport, Team Sky have always ensured that they use cutting edge equipment. Instead of merely being supplied generic models, the team’s sports scientists have worked closely with Pinarello and Kask to develop bespoke low-drag team bikes and helmets respectively. Working in partnership with these brands has guaranteed that Sky use the most effective tools for the job, gaining that ‘extra 1%’ over their rivals.

In addition to cutting edge mechanics, data collection and analysis are at the heart of the Team Sky masterplan. Whether in training or in races, the power output of each rider is recorded. This allows the team directors to advise and manage the relative efforts of riders during races. This ensures that the team effort can be sustained throughout each stage, and that riders do not ‘go into the red’ unnecessarily. This level of micromanagement has allowed Sky to almost turn certain stages of the Tour into power based algorithms.

This power based approach is the basis for their characteristic calmness when chasing down breakaway groups in the mountains. It has been  rare to see Team Sky frantically chasing a breakaway rider. They have instead preferred to steadily, methodically reel in such breakaways, trusting in the data. More often than not this tactic has prevailed, with few teams ever able to find an answer to it.

Since 2010 the #XF Sportbrake has helped keep @TeamSky on the road. See the team's @LeTour in numbers pic.twitter.com/d8BNlU3yJM

However, it is arguably the holistic nature of this strategy that has given Sky the extra edge over their rivals. Look at any professional cycling team and you will see a microscopic focus on physical conditioning and mechanical engineering of jerseys, bikes and helmets. What you will not find at every team however, is the level of attention given to everyday details at Sky.

Their search for efficiency has included countless innovative tweaks, some of which may seem to the untrained eye to be tenuously linked to performance on a bike. Such changes include; travelling with their own mattresses and pillows to ensure riders sleep and recover as best as possible, colour coding water bottles to differentiate between water and energy drinks saving time on the road, and travelling on their state of the art team bus known as ‘The Death Star’, decked out with reclining padded seats, a shower, a treatment room, and a built in sound system.

These finite details are all geared around creating an elite, but comfortable atmosphere for all involved with the team.

When grouped together, all of these seemingly small ‘1%’ details result in visible improvements in performance, creating an elite winning machine. This philosophy has proved undeniably effective for Dave Brailsford and his team.

Funding and focus separate Sky from the rest

There have however been a number of other contributing factors, besides marginal gains theory, that have contributed significantly to the success of Team Sky. Chief amongst these are hefty funding and intense focus.

For example, this project would likely not have been anywhere near as successful as it has been without the extensive funding that has been pumped into it by Sky. Since 2010, the team has received financial backing to the tune of over £180 million, making them the richest team in the history of the sport.

This astronomical investment has been instrumental in success of Team Sky. Without it, they would not have been able to construct the continuous roster of superstar riders that they have had. Additionally, the high level of detail and precision that defines the team ethos may not have been possible had they had same financial resources as their rivals.

Despite this, one part of Team Sky’s blueprint that cannot be critiqued is their undivided dedication and commitment to winning the yellow jersey. Whilst most teams enter the Tour De France each year with a number of targets and goals (both individual and team), Sky traditionally focus all of their resources on the ‘maillot jaune’.

Team Sky back on top in the WorldTour after Froome’s Tour successhttp://t.co/jDyQIEyBDE pic.twitter.com/UXJxrSpu4n

Ordinarily, they do not take a ‘sprinter’, do not send riders into ambitious breakaways for stage wins, and they do not actively compete for any of the other jerseys.

This ethos of ‘the team’ winning the GC together was exemplified most clearly in 2018. During the final week of the Tour, pre-race team leader Chris Froome found himself unable to keep pace with Geraint Thomas. As a result, Thomas became the acting leader of the team, receiving the full support of Froome for the remaining stages. This sacrifice proved a worthwhile one, with the Welshman going on to win yellow by a margin of almost two minutes.

This change has had seemingly little impact on the day to day running of the team, with Dave Brailsford remaining as general manager. During their first year under a new name, Team INEOS looked their usual dominant selves throughout the 2019 Tour De France, with Colombian Egan Bernal claiming the overall victory.

However, heading into the 2020 edition, the team arguably look as unsettled as they have ever been. The recent news that neither Froome nor Thomas would be on the start line in Nice has come as something of a surprise to many. These decisions have left only one British rider in the INOES lineup; road captain, Luke Rowe.

This has led to discussion as to whether the team are moving away from one of their founding values that has bought them so many admirers; having a core of British riders. This narrative could however be somewhat dispelled following the recent signing of Adam Yates on a two year contract.

Whether Team INOES are losing sight of their British roots or not, one thing is certain: their reign as road cycling’s premier team does not look like coming to an abrupt end any time soon, and it will take a monumental effort for any team to repeat their success of the past decade.

We hope you enjoyed this article. Do you think anyone will ever be able to match the achievements of Team Sky? Where do you see the future heading for Team INEOS? Let us know!

If you enjoyed this article, you can read more on cycling here:

Alphonso Davies: From Refugee To Riches

Sports writer/freelance journalist. Graduate from the University of East Anglia with a 2:1 in BSc Geography, using my skillset to write what I hope are interesting, informative articles on the sports I love. Feel free to drop me a line at: [email protected]