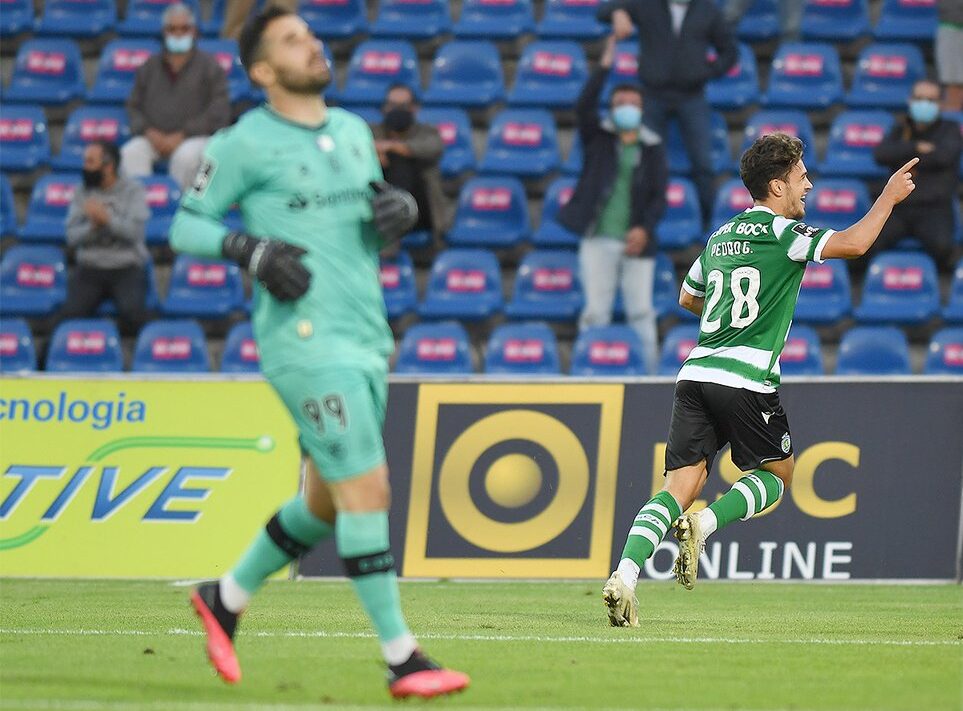 Footballers of the future Pedro Gonçalves

With the UEFA European Under-21 Championship commencing this summer, one name to keep an eye on is Portuguese midfielder Pedro Gonçalves. Whilst England failed to progress through the qualifying stages, A Seleção will enter the tournament -held in Hungary and Slovenia- with aspirations of success.

The Sporting Lisbon star has completed the impossible task of filling the gaping hole left by Bruno Fernandes’ departure. The Lions are set to win their first title since 2002, and Gonçalves has played a vital role this season with fifteen goals in just twenty-three league appearances.

Rumours have begun emerging that Manchester United have made an offer for the former Wolves man, and in this article we take a look at his playing style, what his strongest attributes are and his career path up to this point.

Born in Chaves, “Pote” as Gonçalves is known, began his career with two years at his hometown club’s academy before joining the S.C. Braga youth setup following a trial. He then linked up with Nuno Espírito Santo at Valencia but could not play for an entire year due to Fifa not accepting his registration.

Gonçalves then followed Nuno to Wolves on a two-year contract and played a part in the club’s under-23 squad. Despite sharing a house with fellow countryman Rúben Neves, he failed to make a lasting impression at the club and only made one senior appearance as a substitute in a 2-0 Carabao Cup win at Sheffield Wednesday.

Gonçalves left the West Midlands to return to his homeland with Famalicão, though Wolves technical director, Scott Sellars, revealed that the fee received from Gonçalves’ departure allowed the club to invest in a new astroturf pitch. It is also thought the club inserted a 20 per cent sell-on clause for his next two moves.

At then newly promoted Famalicão, Gonçalves began to showcase his true ability. He produced ten direct goal contributions which saw Famalicão achieve their best-ever finish in a top-flight campaign and narrowly miss out on European football by one point. The fact that Famalicão are now currently four points off the relegation play-off position is indicative of the impact Gonçalves had on his side throughout the 2019-2020 campaign.

In the summer of 2020 Sporting came calling and paid a fee of around £5 million for Gonçalves, they even inserted a reported £51.7 million release clause in his contract which would represent great profit if triggered. As previously mentioned, has had a huge impact this season and his underlying statistics also outline his ability.

Gonçalves is a midfielder by trade, but one with incredible goalscoring instincts, therefore his role in the number ten position compliments his style massively.

As well as his impressive goals tally, Gonçalves’ underlying shooting statistics also point out how dangerous of a threat he can be to opposition goalkeepers. His average of 2.4 shots per game is a league-high for midfielders with more than fifteen appearances this season, whilst no midfielder with that amount of appearances attempts more shots from inside the penalty box. Sérgio Oliveira of Porto is also the only midfielder with fifteen plus appearances to average more shots per game from outside the box than Gonçalves. (All stats according to whoscored.com)

Gonçalves’ stats are not fabricated through set pieces either.  His threat from open play is demonstrated by his 2.2 attempts per game which is a shot more than any other midfielder with more than fifteen appearances in the league from open play.

The quality of “Pote’s” finishing is evident through comparing his xG numbers and the number of goals he has scored this season. Gonçalves is Primeira Liga’s top scorer with fifteen goals, though the xG model suggests that he should only have six goals from the shots he has taken this season. He has overperformed his xG so dramatically due to an immense level of finishing that could be applied in any league.

As an attacking midfielder, Gonçalves may be prolific in front of goal, though his creative play is somewhat weaker. Gonçalves has only registered three assists from his twenty-three appearances this season and underlying statistics back up the theory that he struggles to provide his teammates with chances. Of Sporting’s four central midfielders with more than fifteen league appearances this season, Gonçalves has the highest number of inaccurate short passes per game with six and the fewest accurate passes per game with twenty. But Gonçalves does have the second-highest amount of key passes per game in the Sporting squad which potentially suggests that when in the correct position he has the ability to pick the right pass.

Gonçalves’ overall performance this season can be judged according to whoscored.com’s player rating system. His average match rating of 7.41 is the third highest in the Primeira Liga, only behind Rafa (7.43) and Oliveira (7.42) who possess a wealth of experience that Gonçalves does not yet have in his young career so far. Standing out so early in his professional career earmarks Gonçalves as a potential star of the next decade.

8.6 – Sporting CP's Pedro Gonçalves has scored 16 goals in the Primeira Liga 2020/21, which is 8.6 more than his 7.4 Expected Goals (xG); only Robert Lewandowski has a highest positive differential among all players in the Top 7 European leagues this season. Pote. pic.twitter.com/JUzgDvLbaA

With impeccable figures with Sporting this season, Gonçalves is bound to have potential suitors from this summer onwards. His aforementioned £51.7 million release clause provides any club with a platform to enter negotiations with Gonçalves without having to proceed to talks with Sporting, so which clubs may be interested?

Manchester United have been linked since January, but with Fernandes impressing for the Red Devils would signing the man who Gonçalves has replaced so effectively at Sporting be the correct decision for both parties? Ole Gunnar Solskjær has opted to use a 4-2-3-1 formation for the majority of this season ensuring there is only one central attacking midfield position. Fernandes’ sixteen league goals and eleven assists this season have made him undroppable from United’s lineup, and signing Gonçalves would mean forcing one of the two Portuguese stars into an unnatural position.

With both players possessing such an effective goalscoring output, playing them in a wider or deeper position would restrict them from using their strongest assets in front of goal. Solskjær would be better off pursuing other recruitment targets, that would allow for him to continue to use Fernandes in an effective, central position.

Arsenal would potentially be a better fit for Gonçalves if he decided on a return to England. With Martin Martin Ødegaard’s future up in the air following links to Liverpool, Gonçalves could provide the Gunners with a much-needed goalscoring threat from central areas for a fee potentially lower than what Real Madrid would demand for the Norwegian. Bringing Gonçalves to the Emirates would also relieve pressure on youngsters Emile Smith-Rowe and Bukayo Saka who have been key to success the Gunners have experienced this season. With natural wide players such as Saka, Willian and Nicolas Pépé, “Pote” would have the freedom to accommodate central areas and utilise his goal threat.

Gonçalves has shown in his young career so far that he is not afraid of packing his bags and experiencing different cultures, having already played in Portugal, Spain and England. The twenty-two-year-old could add Germany to that list with a move to Borussia Dortmund. Erling Haaland’s dramatic rise in the world of football across the past two years has seen the Leeds-born striker meet with some of Europe’s top clubs ahead of the summer transfer window. With Dortmund only willing to consider offers of £150 million, the German outfit will have funds to spend this summer in order to replace Haaland’s predatory instincts.

The addition of Gonçalves would help do this. Despite not operating in the out and out striker role, Gonçalves has proven over the past two years that his goalscoring ability is second to none. Whilst he may not replace Haaland’s physical attributes, “Pote” may be able to fill the void of an ageing Marco Reus who has struggled with injuries in recent years, especially in the 4-2-3-1 formation used by BVB this season. With room for plenty of development at just twenty-two, Reus would act as  the perfect mentor for Gonçalves to learn from, whilst signing Gonçalves would complement Dortmund’s recruitment philosophy of developing younger players with high potential.

Pedro Gonçalves has unique attributes that could see him develop into one of the world’s best-attacking midfielders in upcoming years. Particularly, his shot output for someone in his position is particularly eye-catching and he has already developed an outstanding finishing ability demonstrated by xG. He has already proven throughout his young career that he is not afraid of taking the next step to a different league or country in aid of his development, which could see him make an exciting move this summer after the UEFA European Under-21 Championship where he is expected to impress.

We hope you enjoyed the article ‘Footballers of the future: Pedro Gonçalves.’ How far do you think Gonçalves go in his future career? Let us know!

(7389)
£1.99 (as of 16th October 2021 13:12 GMT +01:00 - More infoProduct prices and availability are accurate as of the date/time indicated and are subject to change. Any price and availability information displayed on [relevant Amazon Site(s), as applicable] at the time of purchase will apply to the purchase of this product.)

(4594)
£10.99 (as of 16th October 2021 13:12 GMT +01:00 - More infoProduct prices and availability are accurate as of the date/time indicated and are subject to change. Any price and availability information displayed on [relevant Amazon Site(s), as applicable] at the time of purchase will apply to the purchase of this product.)

(460)
£8.95 (as of 16th October 2021 13:12 GMT +01:00 - More infoProduct prices and availability are accurate as of the date/time indicated and are subject to change. Any price and availability information displayed on [relevant Amazon Site(s), as applicable] at the time of purchase will apply to the purchase of this product.)

(6505)
£19.99 (as of 16th October 2021 13:12 GMT +01:00 - More infoProduct prices and availability are accurate as of the date/time indicated and are subject to change. Any price and availability information displayed on [relevant Amazon Site(s), as applicable] at the time of purchase will apply to the purchase of this product.)

(4333)
£7.89 (as of 16th October 2021 13:12 GMT +01:00 - More infoProduct prices and availability are accurate as of the date/time indicated and are subject to change. Any price and availability information displayed on [relevant Amazon Site(s), as applicable] at the time of purchase will apply to the purchase of this product.)

(20797)
£15.99 (as of 16th October 2021 13:12 GMT +01:00 - More infoProduct prices and availability are accurate as of the date/time indicated and are subject to change. Any price and availability information displayed on [relevant Amazon Site(s), as applicable] at the time of purchase will apply to the purchase of this product.)

(5043)
£3.99 (as of 16th October 2021 13:12 GMT +01:00 - More infoProduct prices and availability are accurate as of the date/time indicated and are subject to change. Any price and availability information displayed on [relevant Amazon Site(s), as applicable] at the time of purchase will apply to the purchase of this product.)

Waiting For the ‘Hammers’ to Fall

Matthew Smith is a passionate sports fan and student with a strong ambition to break into the sports media industry, with his expertise lying in football and cricket. Having received an unconditional offer to study Sports Business & Broadcasting at UCFB Etihad Campus in September 2020, Matt is continuing to improve the range and quality of his sports content. He created, produces and hosts the cricketing podcast Caught and Bowled, produces Football Manger 2021 content on his YouTube channel “mattfm” and currently writes for WBAReport. As a long-suffering West Bromwich Albion fan Matt has been through the highs and lows of supporting his team whilst also witnessing landmark moments in English cricket such as the first time England passed 400 in an ODI fixture at Edgbaston in 2015 and Jimmy Anderson‘s record 11th wicket partnership with Joe Root against India in 2014.

Should the UFC Release Jon Jones?

The 5 Players with the Most Premier League Appearances