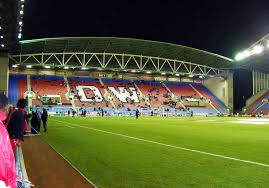 If Wigan were feeling the pressure of a looming twelve point deduction, they certainly didn’t show it on Tuesday night! In front of an empty DW Stadium Paul Cook’s Wigan beat a dismal Hull City 8-0, do not adjust your eyes.

Bizarrely, after going into administration, Wigan now find themselves in need of points to steer them clear of relegation trouble, despite sitting in 14th place in the Championship. They made sure of the points and gave their goal difference a massive boost with their remarkable win over a hapless Hull City.

Where Did the Goals Come From?

Kal Naismith began the rout early when he linked up with Kieran Dowell to open the scoring in just the second minute. A relatively quiet 25 minutes then passed before goal number two arrived. This time, Wales international Kieffer Moore doubled the home side’s lead.

Well, the floodgates were now well and truly opened. Everton loanee Kieran Dowell got himself on the score-sheet, followed quickly by a Jason Lowe effort. Then along came another Kieffer Moore strike.

At 5-0 after 40 minutes you’d be forgiven for thinking the hosts may go easy. It wasn’t to be when a merciless Kieran Dowell fired home once more, swiftly followed by midfielder Joe Williams getting himself in on the act when he smashed home the seventh.

Hull City manager Grant McCann looked shell shocked as he headed to the dressing room, he made three changes at the break, in truth he could of made 11.

Following who knows what kind of team talks at half time, Wigan dictated much of the second half action, as you’d expect at 7-0.

After somewhat of a lull in proceedings, Dowell completed his hat-trick shortly after the hour mark, a wonder goal which could find itself in goal of the season discussions.

What a lovely finish, side foot volley into the top left corner!

Just when it looked as though Hull were set to earn the most consolation of all consolation goals when they were awarded a penalty, the referee, after consultation with his linesman, changed his mind and play continued at 8-0. Hull keeper George Long will want to forget this night as soon as physically possible.

No more damage was inflicted as Wigan rather settled on eight; perhaps the penalty scare was enough for them to agree a truce with their opposition.

A record breaking evening at the @DWStadium and a HUGE victory in our fight in this division!!

The spirit at this football club 💙💙💙#wafc 🔵⚪️💚 pic.twitter.com/otJDXMuOOP

Truthfully, Hull City are a shadow of their former selves since the restart: numerous key players opting not to return to the club has left the Tigers and Grant McCann fighting a losing battle. The Yorkshire club are now deep in trouble and need to find a way to pick up points in their final three games.

More importantly than the emphatic scoreline this was a crucial victory for Wigan, who face the real threat of relegation to League One following their administration.

We hope you enjoyed the article ‘The Championship: Wigan Tame The Tigers.’ Do you think Hull can avoid relegation this season? Let us know!

For more football and Championship news from Sporting Ferret, check out the articles below: