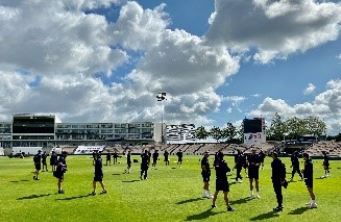 The Windies put up a spirited performance to claim victory in the first test of the three-match series. This game served as a good taster as to what cricket is going to look like during this pandemic. While a lot of questions have been answered as to how the game will change, some remain unanswered. Nonetheless, it was refreshing to see the return of competitive cricket and although there were noticeable differences in the way the game was played, it was still enjoyable.

Things did not quite literally look very bright at Southampton on the first day. The entire first session was lost thanks to typical English weather. While some feared the worst, the weather did eventually clear up as cricket fans around the world prayed for the rain to stay away. Ben Stokes became England‘s 81st captain as regular captain Joe Root was attending the birth was his second child. Stokes was confident in batting first after winning the toss and out walked the English openers in overcast conditions. Bad light played spoil-sport as only 17.4 overs of play was possible on Day-1 with England ending on 35-1. England’s first innings never gained traction as they kept losing wickets at regular intervals. They were eventually bundled out for 204 in the 2nd session of Day-2. None of the English batsman crossed 50 and skipper Ben Stokes who made 43 from 97 was the top scorer. Day-2 ended prematurely too with bad light being the culprit again. The Windies ended the day on 57-1 after 19.3 overs.

The Windies batting on the following day was impressive to say the least. I must admit that I was pleasantly surprised with the way they batted. Kraigg Brathwaite batted with great resolve as he blunted the new ball and made his way to a well deserved fifty. Other notable contributions came from Roston Chase with 47 and a good 61 from Shane Dowrich down the order. The Windies claimed a healthy lead of a 114 after being bowled out for 318 on Day-3. It could have been worse for England had skipper Ben Stokes not stepped up and claimed 4-49 to wrap the innings up. His spell late in the day ensured that the Windies tail did not wag.

England had to bat big and bat long to set a challenging to total for the Windies to chase in the 4th innings. Openers Sibley and Burns set up a good platform to do so after sharing a 72 run stand. Sibley went on to make 50 before dragging one onto his stumps off a no-ball, only to be caught behind down the leg-side the very next delivery. Joe Denly failed to make an impression yet again and a lot of questions have since been raised about his place in the side. It was a different story however for his younger Kent teammate, Zak Crawley, who worked hard at the crease and scored an impressive 76 before being dismissed. Stokes and Crawley shared a 98 run stand for the 4th wicket and things were looking good for the home side. Unfortunately for them, Stokes and Crawley fell in successive overs and that triggered a lower order collapse. England lost a flurry wickets and it was Jofra Archer’s cameo of 23(35) that eventually pushed them past 300. Shannon Gabriel claimed a 5 wicket-haul as England were bowled out for 313 in the end which left them with 200 to defend on an ever-deteriorating surface.

The English bowlers were men on a mission. They bowled full and fast and it was too much for the Windies’ top order. John Campbell walked off the field soon after being struck on the toe from a quick yorker from Archer. Brathwaite, Hope and Brooks all fell in quick succession and that left the West Indies reeling at 27-3. However, what followed was some resilient batting from Roston Chase and Jermaine Blackwood. They shared a 73 run stand before Chase was dismissed for 39. Blackwood was the standout performer with 95 to his name and almost saw his side all the way home. He found an able partner in Shane Dowrich who endured a spell of brutal short-bowling. Even as Blackwood fell with his side needing 11, the writing was on the wall. Skipper Jason Holder along with John Campbell ensured that there were no more hiccups and sealed the victory for the Windies.

While cricket has changed considerably, the essence of the game still remains the same. It still is the bat vs ball contest that we’ve come to love and this game has shown that things will only get better.

Future Fights We Need To See After UFC 251:

The Return of Test Cricket